CAVEAT: there is some swearing in this post but it’s semi-censored for the faint of heart.

The other day, Henry was playing with some toys when he dropped one on the ground and said “oh f*ck”. I turned in shock to him and said “what did you say?” (I know, I shouldn’t have reacted at all but I was shocked). He said “you mean f*ck?” I then had to have an explanation that “f*ck” is a grown up word and a bad word. That he should be using that word to express himself.

Later on I had to do some thinking of my own. I’m a huge fan of the word “f*ck”.  There’s something primitively satisfying about saying it.  It works with almost all emotions and conveys so many sentiments. Ask the people who sit in a 10 foot radius around my office. I say it a lot. If I’m frustrated about an email, I often say out loud “ you have to be f*cking kidding me??”. If I’m angry or annoyed I’ll yell out “Oh for F*ck’s Sake!!!” Since having kids, I’ve made a huge effort to curb my swearing at home. I’ve removed it from my day to day vocabulary in front of my kids. I knew that was the right thing to do however occasionally, one slips out. Like if I injure myself, I swear. Depending on how painful it is, it might be a string of swear words. The other day my arm snagged on a protruding screw in a cabinet and tore some flesh off. Out it came. It’s like I lose all control over what comes out of my mouth when my brain is focused on pain. I’ve tried replacing the word with something similar, but “Ducking hell” just doesn’t sound right. So what can I do? How do I train my brain to not swear when I’m hurt? Or frustrated beyond belief?

How do I explain to my kid that when I say it when I hurt myself, it’s ok? Or maybe not ok, but understandable? How do I tell him he shouldn’t use those words when I love using them? Don’t start dialing the number for children’s aid yet, I’m not going to all of a sudden let my 3 year old swear his little mouth off because I like swearing myself. It’s just something I never thought I’d have to stop and think about. What do you do to stop yourself from swearing? I refuse to use the words “fiddlesticks” after gouging my arm open or stubbing my toe against concrete but do I have a choice?

Maybe it’s time I say goodbye to my swearing crutch. Or at least, retire him completely from my home environment. I should at least try. I pity my coworkers.

Putting away bad words for these bad boys… 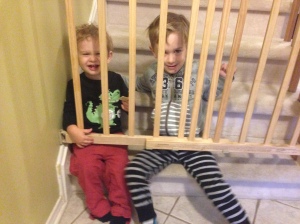