Our little man Henry turned 3 years old on February 7th. He got spoiled rotten this year by having his birthday spread out over two weeks and two countries. It’s pretty much the only way we got him to get over Christmas. So let’s start with party number 1.

We had our first party in Mexico with family on my mom’s side. We had suggested since we’d all be together in one place, why not take one night to celebrate Henry. As our kids grow, our house is filling with more and more stuff, making it less and less crowd friendly. So having a party with 15 people in Mexico was great. We went to the Mexican restaurant in our resort where Henry got some great food, some sweet gifts and even sweeter chocolate cake.

Getting spoiled by grandmaman. It was cute, he opened one of the gifts which was a Diego book and said “Diego… Very Cool!”

Playing with the dinosaurs he got from grandmaman and grandpapa

This cake is pretty delicious

You’ll notice Logan and Martin were not at dinner. They unfortunately were at the hospital since Logan had a serious ear infection. Steph, Niko and Victoria were great stand ins for Logan.

Yum!!! He couldn’t even finish the little cake it was so sweet.

Freddy totally fell in love with Aunt Catou this week. He would only stay calm in her arms at the restaurant.

Aunt Pichou (yes her name is Melissa but the kids call her Pichou) and Uncle Tom got Henry a sombrero which he proudly wore all the way back to the room.

On Henry’s actual birthday, most of the day was just Henry, Freddy and I, so I decided to take Henry out for a celebratory birthday breakfast at Zack’s diner. We then walked over to the toy store in the same strip mall, Tag Along Toys and I let Henry choose a gift. He ended up choosing a mini motorcycle and side car that comes with a little squirrel couple. It’s pretty cute.

Playing with his little motorcycle

Overwhelmed by the amount of pancakes he got. 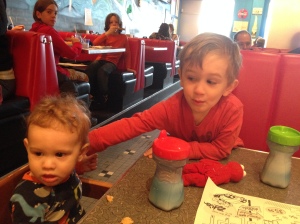 spreading some love to Freddy 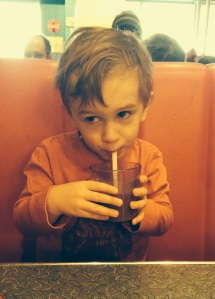 Henry got to order a chocolate milk 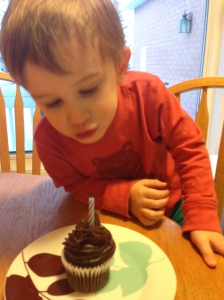 On Saturday, we threw a toboggan party for the rest of our family as well as my best friend Sandra and her kids. We had some comfort food for lunch which consisted of pigs in a blanket, mac and cheese, veggies and dip and some of our favourite fruit. We then went tobogganing at a hill down our street and came back for some hot chocolate, cake and presents. Henry loved every moment. 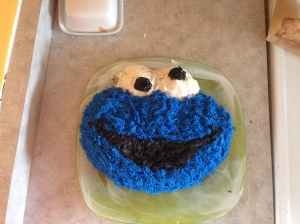 I made this Cookie Monster cake for Henry. It was my first time attempting to decorate a cake and I was pretty happy with the results even though I got icing all over my hands and a bit on Freddy’s head also (he was clinging to my leg the entire time)

Freddy helping out with the decor

Since Henry loves monsters so much, I decided to have fun with the food. 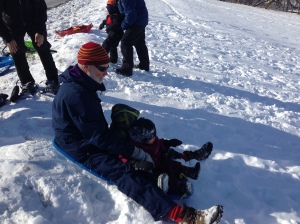 Henry, Greta and Pops heading down the hill

Me heading down the hill face first. I hadn’t tobogganed in many many years. It was so much fun. I could of gone on and on but Freddy wasn’t having much fun so I came back home with him and Juan

Freddy and Juan all bundled up 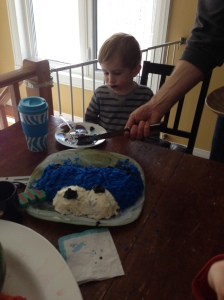 Devouring his cake. I’m so glad he loved it. It’s pretty cute hearing him say “Can I have some more please?

Chris having a serious discussion on the fashion merits of foam crowns.

The following day, my dad took us out to brunch at Big Rig Brewery since he couldn’t make it the day before. We were joined by my uncle Bruce and his girlfriend Nancy. This was the first time my uncle got to meet the boys which was pretty neat. Freddy did some serious flirting with Nancy but I don’t think Bruce minded all that much. The cake lasted almost an entire week as well. By Friday the 14th it was gone, and thus the birthday officially over. I have no idea what we’re going to do to top all that next year!

Once Upon A Time In Mexico

So we’ve been back in Canada for two weeks now and I have been wanting to write a post about our time in Mexico since we arrived, however Freddy got sick on our way home, and it’s pretty much been one person after the other getting sick (minus Chris, knock on wood). I’m feeling better now so I here we go!

A few years ago, my parents suggested that instead of buying us gifts for Christmas and birthdays that we don’t necessarily use, that they would put aside money towards a family trip. Well that trip took place this winter, in the Mayan Riviera of Mexico. And what a great winter to get away. It’s been pretty cold this winter. It was good to have a break from the chill for a week. It was also good for Henry to just get as much pent up energy out of his little body as possible. This winter has not been kind for him playing outside given that his little brother freezes so quickly.

We stayed at the Barcelo Maya Beach Resort which was really nice. They had excellent food. Chris made a point to have guacamole every meal, except for maybe twice. The beaches were beautiful, they had two full size waterparks on the complex on top of a few splash pads and some jungle gyms for kids. The complex consists of 5 hotels owned by Barcelo and spans about 3km. Chris got to walk those 3km trails every morning with Freddy who refused to adjust to the one hour time difference. Freddy didn’t really cooperate at all sleep wise during the entire week. He would make a point to be up between 5 and 5:45am every morning. I think it’s because he got used to seeing the sunrise with Chris who would take him out and let Henry and I sleep. He would make up for his early rises by falling asleep on the beach later on in the day in his stroller. I think the sound of the surf, the heat and the slight breeze were a perfect sleep inducing trifecta for him.

Henry was a real champ most of the week. He had a few meltdowns here and there, including one epic one in the buffet one night that resulted in him being dragged back to the room for 45 minutes until he calmed down. He just loved spending the week with his cousins. I’m pretty sure he couldn’t care less if we were there or not sometimes, as long as Logan and Niko were around, he was good. In fact, we often had to use the possibility of not seeing his cousins as blackmail/bribery to get him to obey. We had hoped to do some kind of off resort excursion but never got around to it. It would have been too much of a hassle to take the kids off resort plus there was so much to do there that we weren’t left feeling like we were missing out too much. Plus the excursions that really interested us were not kid friendly at all. They had a little shopping mall on the complex as well where you could haggle for merchandise, instead of paying an arm and a leg at the hotel gift shop.

Our days consisted of waking up (some of us earlier than others), heading to the breakfast buffet between 7-7:30. They had these amazing churros (friend donut sticks) that they would lay out every morning. I’d top my breakfast with one each morning… Then we’d head back to the room and start the “want to go swimming? Ok, we have to put on sunscreen! No? Ok, then we’re staying in the room then. Oh, you want to put sunscreen on now eh? Yeah that’s what I thought” routine. You know, people complain a lot about having to put on so many layers of clothing on their kids in the winter. It’s just as bad in the summer with constantly reapplying sunscreen. Especially if you spend 75-80% of your time outdoors, swimming and playing in the sand. We’d often be at the beach by 9am and hang out there for a few hours then go to the water park, or vice versa. We’d then go for lunch and then back at the room where we’d try and put the kids down for a nap. Often by 2:30 pm, Henry was out cold. Freddy was hit or miss so we’d often take him out for a walk while the other parent stay in the room and watch Henry and Mexican tv. We’d have dinner at 6:30 when the buffet open and were usually back at our room by 7:30 for bedtime. Then Chris and I would have some drinks and hang out on our balcony, chitchatting and playing card games. I think for me, that was my favourite time of the day. Just chilling out and enjoying each others company.

While there, we celebrated Henry’s 3rd birthday. Well part of his birthday. I’ll do a separate post on all the birthday festivities he got to enjoy.  We also had a night where my parents took the boys for dinner so Chris and I could have a romantic dinner with each other. It was great. I find we act all giddy when we’re kid free, even if it’s just for 2 hours. That could have to do with the fact that we haven’t had a night out with each other since early March 2013. We ate at the resort’s Mexican restaurant and had a blast. It seems like the boys took it relatively easy on my parents as well which is great. I always worry they’ll act out.

People often say “Don’t travel with your kids”. I can understand where those people are coming from. If you want to just relax, do nothing but slowly bake, drink and party, then for sure, don’t travel with kids. Traveling with kids is not relaxing. It’s a very different sort of travel but if I reflect on my entire week, I’m glad we did travel with them. I love the idea of exposing our children to different cultures and experiences. Now I know, a resort isn’t really where they’ll get the full Mexican culture, but they got to see a bit of it. It’s hard work traveling with them, but I find the memories we created worth it. 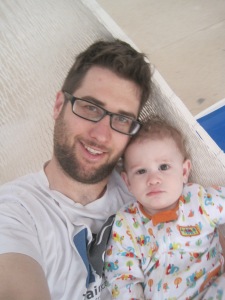 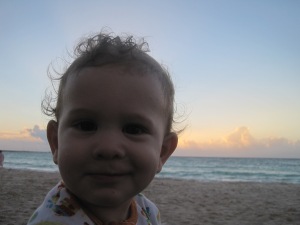 see daddy, if we had slept in, we would have missed the beauty and splendor of greeting a new day!

We got some professional pictures taken while there. We only bought two pictures because they were crazy expensive 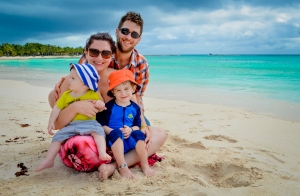 OMG the water is touching me!!!!

We like to spell out the place we are in the sand whenever we travel. Henry loves this tradition.

My little monkey Freddy and I 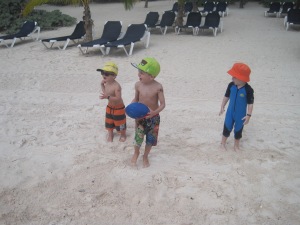 Football with the cousins

Henry made sure he had about 6 bananas a day.. It’s pretty much the only thing he wanted to eat the entire time.

You’d never know that this playpen is actually Freddy’s with the amount of time Henry hung out in it. 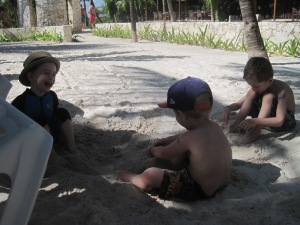 Henry completely in love with his cousins

Enjoying a predinner drink with my boys 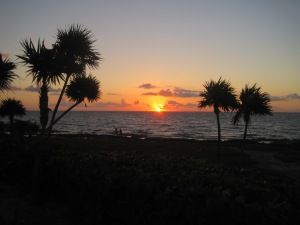 One of the many sunrises Chris and Freddy witnessed

One of the cool water parks 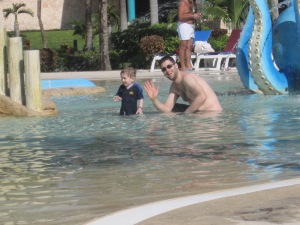 Chris seemed to be having more fun than Henry

I always wondered why they call it a play pen. Now I know. 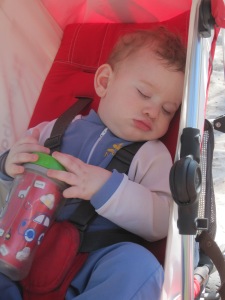 one of his many morning naps.

Freddy is obsessed with his cousin Victoria’s face. He keeps wanting to take it off.