Filed under: Uncategorized — frombeantosprout @ 9:01 am

I cannot keep up with Freddy anymore. This kid is in some kind of a rush. I should have known I’d have my hands full when he started commando crawling at 5 months. At 6 months he was full on crawling, at 6.5 months he was pulling himself up on whatever he could find (including the back of my legs as I was making dinner and had to call for Chris to come help me in a panic since I couldn’t move) and now at almost 7 months he’s pulling himself up and cruising along furniture. He’s just so busy all the time. He reminds of of the rabbit in Alice and Wonderland. Sometimes it’s like the compulsion is beyond his control. When I’m nursing him, if he’s overtired, he squirms left and right and then rolls over onto his stomach while trying to maintain a latch which results in me yelping in pain and him getting frustrated. “Mom, all I want is to lie on my stomach to eat, why you gotta stop me?”. Changing his diaper has become a nightmare. It’s like wrestling an alligator. Each diaper change/clothes change ends with Chris or I covered in sweat and frustrated. I thought Henry had moved quickly as a baby but compared to Freddy, Henry was slow. Henry only started crawling around 8-9 months and even then it was a laboured crab walk thing. Freddy can move pretty quickly and crawls perfectly on his hands and knees. I was kind of hoping he wouldn’t be mobile for our trip to Mexico in January but it looks like that won’t be the case. While on our honeymoon, there was a popular song in Ireland called “Can’t Stop Moving” by Sonny J and I feel it’s Freddy’s mantra. “Can’t Stop Moving, Can’t Can’t Stop Moving, Can’t Stop Moving, I Can’t Keep Still”. Who knows, maybe he was a shark in a previous life and this is a survival thing… 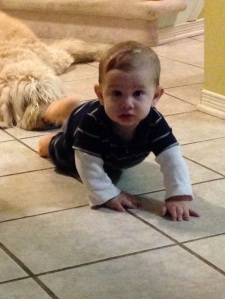 Lock all the gates and put away all the tiny toys, I’m coming! 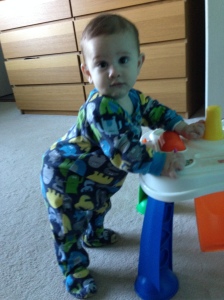 The first time he pulled himself up he was just as shocked and confused as we were. It was like “woah, did you know we could do this with our bodies?”

Filed under: Uncategorized — frombeantosprout @ 8:42 am

Hello all, I got super delayed in posting about Halloween and then debated whether or not it would be even worth it at this point but decided to post about it anyways.

This year, we went characters from Sesame Street. It was our first time going in our actual neighbourhood as the previous years we had gone to my sisters to trick or treat with Logan and Niko. We also invited Loly and Pops over (also known as Chris’ parents) to trick or treat. Loly ended up handing out treats to the goblins and ghouls on our street and Pops tagged along with us.

I had found a Cookie Monster costume for Henry at Old Navy back in September and he was going through a huge cookie monster phase at the time so I snatched it up. Then decided it would be cute if Freddy went as Elmo. I decided to go as Abby Caddaby and kind of created my own costume based on her character. Chris dressed as the Count. We were going to paint his face purple but he wasn’t feeling well and didn’t really want to wear a costume so he just put on a dress shirt, vest and a cape. It was nice and warm which was a plus and the rain held out longer than anticipated.

We ended up just hitting the tiny street behind us. Turns out toddler legs aren’t meant for the long haul on Halloween despite my prodding. Freddy didn’t even last half the street before he was done. We only collected candy for Henry this year, not Freddy. We told people that Freddy was apprenticing this year, getting ready for the next. The only exception were two houses. One where they were giving out full size chocolate bars. That’s a super rare thing these days so when they offered one to Freddy I was like “hells ya!”, the other was this cute elderly eastern European couple who insisted we take an extra treat bag. When we said Freddy was too young, they then said “well for the parents then!”.

Henry was still pretty shy. He’d go up to the door, whisper “Trick or Treat” and then shove his tiny little pumpkin bucket at people. He’d then whisper “thank you” and turn around and leave. We often had to ask him “what do we say?” and then he’d say the thank you. Last year we had that little pumpkin bucket also and it didn’t take long for it to be full so this year I brought a reusable bag as well to dump candy in when his bucket got too full. This turned out great for him, people would assume he didn’t have much candy and would give him extra!

After an hour and just one street, I wanted to keep going but Chris pointed out that Henry had said a few times “go home?” so we hit the houses on the way home and that was it. I get so caught up in the spirit of Halloween some times that I forget that Henry is only 2 years old. We got back home to find Loly handing out candy like a pro, engaging the kids in Halloween related banter. It was effortless. Freddy was revving himself up into full freakout mode since he was hungry.

To top off our evening, we all got flu shots! Now I hate needles. Like a lot. To the point where I will sometimes hyperventilate. But I’ve gotten used to Pops showing up in the fall with flu shots so this time, I requested them to avoid the anxious anticipation. And honestly, Pops gives great vaccines. You don’t really feel it. He gave one to Freddy who didn’t say a peep, just stared at him and Henry just said “Ouch” then kept on giggling.

Once the kids were asleep, Chris hit up Costco (it was dead) and I counted and sorted candy. Quite the haul! Can’t wait until next year! 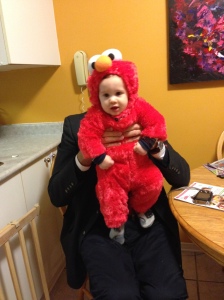 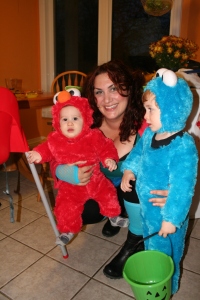 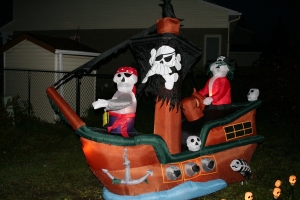 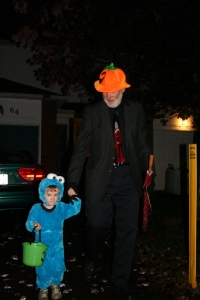