This past weekend, I had the opportunity of being in my friends Caitlin and Brian’s wedding. What a great wedding it was. First off, I want to start by saying that Caitlin was probably the most easy going bride I’ve ever met. All of her bridesmaids have a lot going on right now in their lives, such as young children, moving to the states over the summer, completely renovating a home. Many brides would have freaked out about all this but Caitlin was super understanding. Several times in the past year I’ve told Chris “I feel like I’m not doing enough” and then I’d send Caitlin an email or text and she’s write back “no worries”. She just rocked it as a bride.

The wedding took place at the Viamede resort on Stony Lake near Peterborough. So this also marked the farthest we’ve ever traveled with Freddy. Chris took Friday off so we could take all day getting there, which is pretty much what happened. I remember telling Chris in the time we took to get there, we could have gone to Toronto and half way back if it had been just the two of us. We spent a good hour in Perth, stopping at the LCBO, then at Mcdonalds where I was hoping there would be a game room for Henry to go crazy in but alas there wasn’t. Not that he cared much, he was ecstatic to get a happy meal. He barely touched his fries and chicken nuggets though but devoured the yogurt that came with it and also was super happy about getting a full bottle of milk out of the deal. His toy was a batmobil but he was happier playing with the plastic spoon. Go figure. Freddy slept on and off throughout the entire trip but made himself quite vocal when he was awake. Poor guy got the raw end of the deal this weekend, spending a large part of it in his car seat or strapped to Chris or being delayed in feedings. When we got off highway 7 to get to the resort, the roads were crazy windy and I felt I was going to be sick. Chris kept asking me if I wanted him to slow down or pull over but by this point the kids were screaming so I told him “don’t stop, just drive until we get there”

We’re on our way! Still smiling as we had been in the car for only an hour at this point.

I had to take a picture of this place. It’s a chip truck that basically added an entire building to its back.

The resort itself was pretty neat. Picture the type of place like in Dirty Dancing. I imagine in the summer time it’s quite similar with organized activities etc. I had upgraded to a kind suite and I’m so happy we did. Our room was MASSIVE. We had a full size living room, a kitchen, a patio, then a seperate bedroom with a jacuzzi tub and a private patio. There was also a gas fireplace in the middle of the suite which you could see from both the room and the living room. Henry slept in the living room on a cot mattress on the floor and he seemed to enjoy his little setup. There was even a little nook where we were able to place Freddy and then used a blanket and duct tape to make his nook a little more private/quiet.

When we got to our room, Freddy was just rolling around ecstatic to be out of his seat.

We had the rehearsal and rehearsal dinner on Friday night. I absolutely loved the decor that Caitlin and Brian did. There were mason jars everywhere filled with candles. Some were wrapped a bit in twine, others half painted. There were branches as accents and lovely bunting hanging from the ceiling. I felt like I had died and gone to Pinterest heaven. At this point I got to meet Caitlin and Brian’s family and they were just super nice and friendly. I had been a little worried that I wouldn’t know many people there and might be shy but they just welcomed us with open arms. The rehearsal dinner itself was delicious. They had a ceasar salad which I believe was sprinkled with crack. Caitlin and Brian gave us each a gift for being in their wedding party. I got this awesome necklace that has the first letter of my name cross stitched into it and a neat branch like coffee mug. There was a campfire that night where everyone was invited but Chris was back at the room with the kids already and I felt it might be a rough night in a new location so I opted to go to the room and get some sleep instead.

Freddy got to meet Eddie, my friend Katie’s son. She was another of the bridesmaids in the wedding.

That night, Henry woke up a few times, screaming for his daddy and running towards the front door looking for him. Chris ended up sleeping on the floor with him a few times. He’s a great dad that way. In fact, Chris took care of the boys the entire weekend while I was running around for the wedding. We’d have a system where if I could find 5-15 minutes I would run and feed Freddy however it was a boys weekend for sure. Chris is going to write a separate post about his weekend with the boys.

The next morning we were up early and happy that we had brought a loaf of bread and peanut butter for Henry. We then went for a second breakfast at 8:30 in the main dining hall. It was great, while we were piling food onto our plates, Brian’s mom Karen took Freddy and walked around with him. He just kind of lunged at her when she was walking by, pretty much physically screaming “Pick me up and hug me and love me!” Karen seemed happy to oblige. After breakfast, Jill, another bridesmaid, drove us all to get our hair and makeup done. Julie (Caitlin’s maid of honor and now sister in-law) found this great place about 30 minutes away and we were pampered for 2 hours or so.

Caitlin after having her hair done. She looks so calm eh? And how cute is her hair?

Then it was wedding time! Rushed back to the room, fed Freddy and then ran over to Caitlin’s room and got dressed. It was raining like crazy. You should have seen us try and get to the chapel dry. We each had an umbrella in our hands, our bouquet and holding up part of Caitlin’s dress. We were successful though! I had asked Chris to take pictures of the wedding but most were blurry because he was dealing with Henry and bouncing Freddy. At one point, Caitlin’s cousin offered to hold Freddy during the ceremony so Chris could tend to Henry. I was so grateful for her gesture. Just another example of how awesome their families are. Caitlin and Brian had made these neat wedding wands for guests to wave. They became Henry’s new favourite toy for the rest of the weekend. 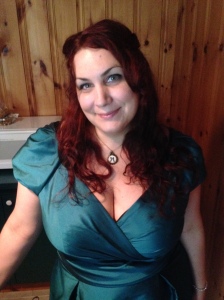 Check out the awesome makeup job they did. You could barely tell that I haven’t slept through the night in over a year! Oh and that’s the necklace I got as well. Cute eh?

Chris got his hipster self on and wore a bowtie. He looked so handsome. 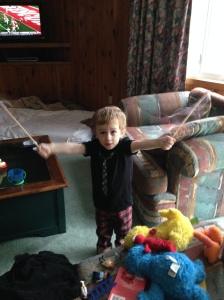 Henry waving around his wedding wands.

Freddy passed out in frustration after I fed him. He didn’t enjoy having to wait for feedings.

The ceremony was beautiful. We got to hear the story of how Brian proposed and the entire thing was mixed with humor and genuine emotion. It was short and sweet too. No readings or getting up and down. Just what mattered the most to both of them. I loved it! We then took a bunch of pictures with the photographer who you could tell just loved her job. She’d get super excited about a great shot. Her energy was infectious. We then had a quick cocktail hour (and Freddy as well) and then it was time for dinner. Again the food was amazing. And mom, if you’re reading, I ate asparagus! Two stalks of it! Yes, me! I know, crazy right? It was so good!

Chris and the boys were sitting at a separate table and Henry started complaining loudly about seeing me. I could hear him yelling “MAMA”, so to avoid him screaming this for the next hour or so, we let him sit with me at the head table. Again, many brides would have said “no effing way, I had a clear vision about this dinner” but Caitlin just said “sure, let him come”. It was cute watching Henry clap at the end of everyone’s speeches. Poor Chris wasn’t faring much better with Freddy though. He was just losing it. When the speeches were done, I went to relieve Chris so he could eat his meal and went back to the room with the boys to feed Freddy and put him down. Chris then came back and I went back to dinner to partake in the ice cream bar/buffet. I also got to watch the first dance and the father/daughter, mother/son dances. I had a quick drink then went back to check on Chris and the boys. Freddy was loosing it. His voice was all hoarse and he was very warm, he was getting sick and couldn’t calm down so I ended up staying in the room for the rest of the night. I felt terrible about missing the rest of the party, it sounded like it was such a good time. 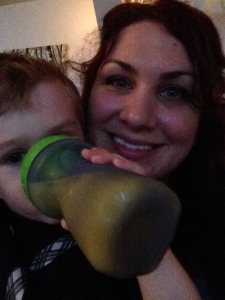 Selfie at the head table

Chris and Freddy at the their table.

I absolutely love this picture and can’t believe I got it on my iphone. They were just so in the moment, it was like no one else was in the room.

The next morning we actually got to sleep in a little (I use that term loosely since Chris joined Henry on the floor at 5 and slept until 6:30 and Freddy was up from 3:30 to 5:00 but then slept until 7). We packed everything and went to enjoy a last breakfast before hitting the road. 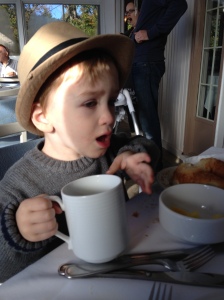 Coffee talk with Henry White (I just noticed you can see Caitlin yawning in the background. Even though they had a late night, they came for breakfast at 8:30 to see everyone)

I love my coffee with 99% orange juice in it.

His second cup, but switched to the lighter stuff, ie water. 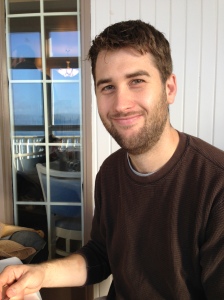 my handsome hubby who wins the parenting award for the weekend. I wouldn’t have been able to participate in the wedding without his help.

Anyways, a bit of a longer post this time around, but I wanted to make sure I captured it all. Another highlight, while driving back, we filled up on gas at 115.9!!! Insane right!

A big congrats to Caitlin and Brian and their wonderful union. The only thing that could have made it better would have been the presence of a cat or two. 🙂