We are full into the fall swing of things and our weekly schedule is almost full despite me saying we were going to take things easy this time around. On Mondays, Henry, Freddy and I got to Making Music Meaningful classes, where Henry is completed in love with the teacher Nicole. As we get closer to the retirement home where the classes take place, he just starts repeating her name over and over again. It’s kind of cool also that a lot of the mom’s who were there when Henry was a baby, are back with a second child so it’s kind of like a class reunion.

Speaking of reunions, Freddy and I started up our Fitmom classes last Tuesday. I had forgotten how satisfying that class can be. Sue is just such an amazing trainer and personal motivator. I feel like I’m pretty much going to die at the end of each class but she never forces you to push it beyond your capabilities. She will push you, she can point out exactly when you start slacking off (even if you’re pretending to be working hard). I’m so glad I started doing these classes again. Today’s class was crazy hard, but in a good way. In just a week (and with a better bra) I’ve noticed a huge difference already. We do a warm up lap before the actual class starts and last week I power walked it, this week I jogged most of it. I feel at a better place physically then when I started last time with Henry. I kind of feel my endurance level is higher. Could be from running after a toddler all the time. Guess Henry helped build up my stamina. Every time I finish a class, my endorphin levels are so high, I feel like running 5km or hiking a tall peak. The other mom’s in the class are super inspiring as well. There’s one mom who’s there with her 2 month old and her preschool aged daughter who works out alongside us. She’s so adorable and well behaved. I couldn’t imagine Henry hanging around us working out when there’s a beach and water so close by. Anywho, I just feel good doing it, so Sue if you’re reading, thank you!

On Wednesdays, Freddy and I have started a Monkey Rock Music class at the Soloway Community Center. We’ve only done one class so far, but it is really fun.  Lots of boogieing and singing and clapping. Our instructor Jordan is pretty cool too. He seems very at ease with the chaos that ensues from babies climbing all over his guitar.

Thursdays, we usually try and go to the movies in the afternoon.

So yeah, pretty busy but I kind of like having this much structure. 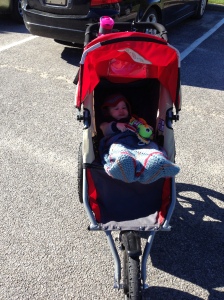 Getting ready for a jog. Freddy loves jogging.

Freddy trying to outdo his mom in the Superman pose. Although he totally cheated by propping himself up with his hands. (pay no attention to the sweaty mess behind him) 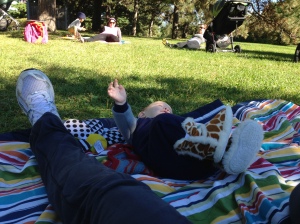 Someone was all tuckered out after the class.