Henry loves to help us cook. And replace the word help with hinder. He means well, he really wants to participate, but usually his helping consists of him pulling out all the cutlery from the drawers and spilling food and liquids all over the countertop.

This weekend, Chris and I decided to cook a bunch of food for the freezer. Something about the weather getting colder has sent us into a kind of nesting mode. Since we both don’t know how to do canning, freezer meals was the next best thing. We made a huge batch of spaghetti sauce, black bean soup, thai coconut soup, a buffalo chicken casserole, fresh wontons to place in wonton soup. Chris also smoked pork ribs all day for dinner and made some buttermilk biscuits and roasted peppers for dinner. Everything was delicious, and cheap!  I price matched a ton of food so we spent about $100 to make all these meals.

We would have probably finished cooking sooner, but Henry decided to help, so it took a little longer. Oh and Freddy for some reason needed the occasional bit of attention so that took time as well…

Some of Chris’ handy work. He spent all afternoon yesterday caramelizing the onions for the sauce and started the sauce at 5am with Henry.

What I learned from making wontons… don’t bother, just buy the frozen kind. These took forever to make! I hope they’re good. 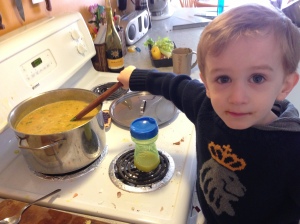 Henry “helping” with the Thai coconut soup. He kept trying to grab spoonfuls of the soup and pour them into jars but ended up pouring it all over the stove instead. 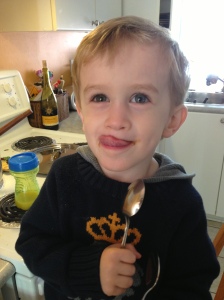 Oh hi, remember me? Yeah I still exist even though they locked me in this contraption for most of the afternoon.