How To Sleep Train Your Second Child? September 4, 2013

With Henry we tried everything and the only thing that worked was Cry It Out (wait while someone gasps in shock and clutches their pearls while screaming “Think of the children!” ). Yes, we are some of those cruel monsters you read about who let their kid cry themselves to sleep.  Before you start dialing Children’s Aid, it was a strategic “Cry it out” method. We didn’t just put Henry down one night and said “We’re going to the Barley Mow, get it all out of you in the next hour before we return”. What we did do, was wait 3 minutes, then go to him, tell him “dodo” and leave, then wait another 5 minutes and return to say “dodo” again. I remember one night, I think he lasted for almost 2 hours but the night after that, it was smooth sailing all the way.

I’m hesitant to try this method with Freddy out of fear that he’ll wake up Henry. Henry’s still not the greatest sleeper. He’ll sometimes wake up when our fat cat tries to jump over the baby gate in the middle of the night and does a “hop/rest” on the top of the gate.  I don’t want to sleep train one kid, just to have to sleep train the other again. It makes for very cranky parents. Our pediatrician suggested we send Henry away for 2-3 nights while we sleep train but I don’t feel it’s very fair to Henry. He’s not at the age yet where we can explain that we’re sending him away for his own good. All he’ll see is us driving away with the baby. Our pediatrician also suggested trying a sound machine to see if the white noise will keep Freddy asleep during his light sleep phase. I’m all for it but Chris is adament we don’t get another child dependent on white noise like Henry is. I personally love white noise, there’s something so soothing about it. Maybe I had a fan on or something in my room when I was a baby?

Anyways, like I said, I’m looking for answers like everyone else, so if anyone has any suggestions (aside from the “wait and see if he sleeps better on his own” method because I most likely will lose my mind before that time). Help me Obie-Wan, you’re my only hope…. 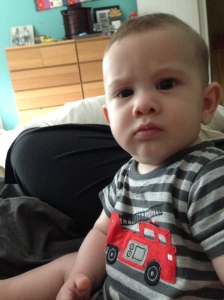 Mother, the whole concept of sleep is highly overrated. Henry tells me I can easily get by with 20 minute cat naps here and there. He’s really smart, I’ll subscribe you to his newsletter.

One Response to “How To Sleep Train Your Second Child?”