My little Freddy is quite the sensitive soul. He hates when people are upset, it just gets to him. I’m starting to suspect that he’s half Betazoid like Deanna Troi (yeah, I went there with the Star Trek TNG reference…).  Most people who see someone cry will think “wow, poor so and so, whatever they’re going through must be tough”. Freddy just starts crying himself. Now this wouldn’t be a bit deal if I didn’t have a toddler who cries at the drop of a hat. Literally, he will cry if his hat falls off sometimes. Or if there’s too much (or not enough) milk in his cheerios, or if Ginger is standing too close to him (or not close enough). You get my point. Now when Henry starts crying, I have two kids to deal with who are losing it. Luckily, Henry can turn off the tears just as quickly as he turned them on, but my little sensitive Freddy takes a bit longer. So when Henry starts to lose it, I turn to Freddy right away saying “it’s ok little fellah, he’s not really sad, he’s just upset” while I watch that little lower lip of his start to quiver. That’s when I start pleading with him to not start crying. I lose that plea about 98% of the time.

At the same time, I kind of like the idea that my little guy cares so much for his older brother, that he shares his ups and downs. He’ll stare at him for really long periods of time, just smiling. I can’t wait until they can interact more and play. Henry can’t wait either. Now there are no pictures in this post of Freddy actually crying, I usually don’t have time to run for my camera with both boys losing it. 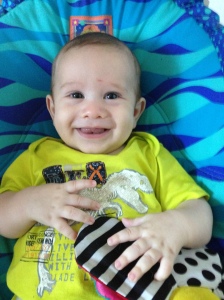 This is his “Say Whaaaaa?” expression

You want me to reach all the way there to get my toy… Geez, what is this? Boot Camp?

These hands are awesome, I can grab stuff with them, eat them, clap with them…did I mention eat them? 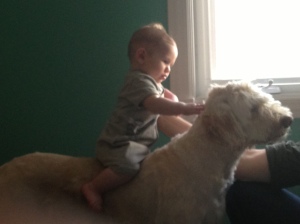 We have the most patient dog in the world