Filed under: Uncategorized — frombeantosprout @ 10:11 am

I haven’t been posting much now have I? You can blame it almost entirely on my recent purchase of an iPhone. It’s pretty much my portable internet however it’s impossible (well not impossible but a real pain in the butt) to write a blog post on an iPhone. So I have to go an turn on our netbook and then write from there which isn’t as convenient.

I feel like I’ve been busy doing nothing lately. I bring Henry to daycare, come home, try and get Freddy to sleep a bit, usually he falls asleep around 10ish, then I nap as well. We’re up around noon, have lunch and then the afternoon is spent tidying up or catching up on more sleep depending on how the previous night was. I’ll do groceries once a week in the morning and I’ll make special outings to the store or the mall occasionally but I haven’t really scheduled anything like last time with Henry. With him I had activities planned daily. Now I know Freddy’s only 6 weeks old and true, I wasn’t doing much with Henry at 6 weeks either but I kind of feel like I won’t take on as much this time around. Probably due to the fact that I’m keeping Henry home on Mondays and Fridays as of next week. It’s cut our daycare bill in half doing this, so I’m happy we’re doing it, but I’m terrified of taking care of Henry all day and Freddy.

One activity that I’m adament about doing, and this one’s for me, is starting my Fitmom classes again at Westboro beach. I’m hoping to start in the next couple of weeks. I loved that class so much last time and I just felt so good about myself each time I did it. Sue is such a great motivator as well, I can’t wait to get back at it.

As for other activities, Henry will be starting music classes again with his girlfriend Nicole at Making Music Meaningful starting July 8th in the mornings. He loves to dance and sing so I thought this would be perfect. Also, Freddy gets to tag along for free until he’s 6 months old. This one is a partially selfish move as well to fill up time on one of the days Henry is at home. I’m also hoping to utilize my mom’s pool in the summer time for Fridays with Henry as well. Henry is also doing swimming lessons on the weekends with Chris. That’s his special “daddy and me” activity that we wanted to keep up.

Other activities I’d love to be able to do more often this time around is go to the movies, especially in the summer time. I’ve gone to see 3 movies since Freddy was born (the last one being the new Star Trek movie yesterday) and I just love going there.  Freddy pretty much sleeps the entire time so it’s great.

If it seems Freddy’s getting less activities, it’s true, but I figure he’s going to be so engaged with his brother being at home, that it’s like an activity in itself.

Now Henry believes he’s taking Chris to swim lessons and not the other way around.

Time at the park counts as an activity right? I plan on bringing him to the park once a day when he’s at home. 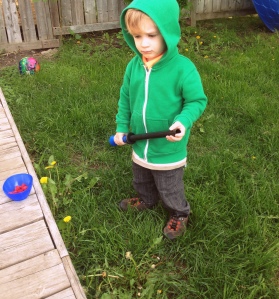 and if the park doesn’t work, there’s always the backyard!

See, Freddy doesn’t need a ton of activities, this thing kept him occupied for over an hour. 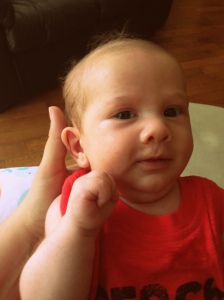 You mean I have to follow my big brother around to do his stuff? What a ripoff!