Yesterday, Chris surprised me with our first picnic of the season. He’s been good at keeping me on a “nap” schedule to catch up on my sleeping and yesterday morning while I was taking a nap in the morning, he took the boys to Sobeys and bought a bunch of my favourite picnic foods. We didn’t get a chance to go last summer since we were super busy so this was the first time Henry got to have a picnic since he was 6 months old. He loved it. Freddy, being only 3 weeks old, tolerated it, but I think in a few years time, he’ll be having just as much fun as his big brother was.

Chris had to run back to the car to get the picnic blanket, then it was a race back to the table.

Setting up our delicious meal. Henry even popped a cherry tomato in his mouth, then spit it out when he realized it was a tomato.

Believe it our not, this was the best picture we could get for Henry and I. At least he’s looking kind of in the direction of the camera. 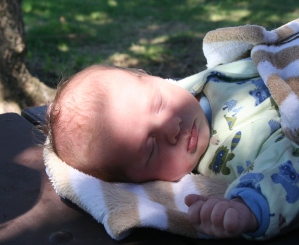 Napping on the picnic table. That will have to change once he starts rolling over. 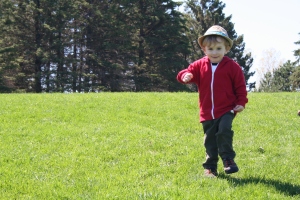 So after lunch, Henry spent the rest of our time running up and down a hill. There was a giant bouncy castle a few hills over, but this was what he wanted to do. 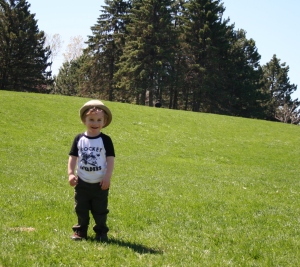 He got so hot, the hoodie had to come off. That is a pj top he’s wearing, we’re learning to pick our battles.

More napping shots of Freddy. He didn’t do much more.

No matter how big Henry gets, he still loves doing this with his daddy. 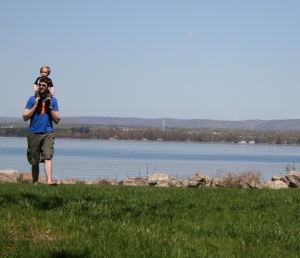 Lucky for us, Henry only realized there was water towards the end of our picnic. Had he figured it out earlier, he would have insisted on being dangerously close to the water the entire time.