Henry has become crazy obsessed with Elmo lately. Like CRAZY obsessed. Before Christmas, we would occasionally watch Elmo videos on Youtube and Henry seemed to enjoy it, but it didn’t seem like it was a big deal. After Christmas, things changed. He found an Elmo doll I had bought him when he was about 6 months old and started carrying it around with him everywhere. In January, every time he would see the iPad, he would yell out “ELMO!!!”. Then it just kind of spiraled down from there. We had a few Sesame Street books at home that he never cared about, but now all of sudden, we have to go through them several times a day and he points out all the characters in it. It’s no longer just about Elmo, although he’s the popular one in our family. He’s also a big fan of “Ookie” (cookie monster), “Big Bed” (big bird), “Ah-ah-ah” (the Count), “Mernie” (Ernie), “But” (Bert), “Moee” (Zoe), “Roveh” (Grover) and “Mosceh” (Oscar).

Even when we’re out and about now, he’ll zero in on anything Sesame Street. We were at Bulk Barn on Monday and he starts yelling “Elmo! Ookie!” over and over again and both Chris and I are wondering what the heck is going on, then we look up above the shelves and there are Sesame Street pinatas.

At first I was slightly annoyed by this obsession. Like him needing to have his Elmo dolls (plural now since my mom bought him one recently) wherever he goes in the house. Or the constant reading and re-reading of his two Sesame Street books. I had always pictured myself as one of those parents who doesn’t buy into brand name things and well, Elmo is like the most brand name thing out there for kids practically. Anyways, after a while though, I decided to just go with the flow and stop acting like Elmo was my parenting enemy. We watch Elmo’s World videos now online and they’re not that bad, they have a set format that Henry loves and can follow.

I’ve also started using Elmo to help with parenting and teaching Henry things. Henry will tell me now when Elmo “poops” and needs a diaper change. A big step towards potty training! If only he could tell us when Elmo thinks he’s going to poop instead of afterwards. He’s also sharing his food and drink (pretend) with Elmo and I love that he feels empathy towards this doll and wants to nurture it. He’ll even put Elmo to bed and tell him “dodo”. I have high hopes that all this helpfulness towards Elmo will be transferable to the baby when he’s born. 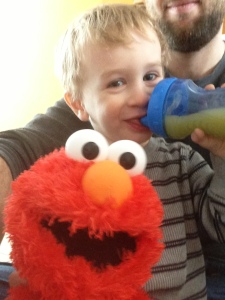 Check out my best bud!