Okay this may be a long post as we were fairly busy this weekend.  First off the most exciting news is that Henry is now sleeping in his new room in a regular bed.  Starting Friday he took all his naps and slept all his nights in a regular bed.  He transitioned no problem and we are very proud of him.

Now for the rest of the weekend

Friday morning we headed off to Almonte to make good on a long overdue Christmas present.  We went to Gill and Georges’ were Melina began the process of making custom fitted sheets for their bed.  Apparently finding proper fitted sheets are the bane of Gills existence while George couldn’t care less.  We snacked on some fresh sourdough bread that I had baked that morning and then set of to work.  I was half involved which meant I got to play with Josie, Greta, and Henry between doing various tasks for Melina.

George and Gill were nice enough to take Henry for a walk with Josie and Greta so Melina and I could get down to serious business.  It also must have tuckered Henry out because we left shortly after they came back and he slept the entire way home and then some more in his new bed.

When he woke up I took Henry and we did some chores while Melina took a nap.  This involved me trying to supervise Henry while cleaning out the garage.  He would get bored so we then headed to do chores in the back yard until he got bored there.  We then switched back to the garage and repeated until it was time to head inside.  Needless to say I didn’t manage to get a great deal done.

We then headed to Mongolian Village for dinner.  Henry sat by the window and waved to everyone who came and left the restaurant.  He also wolfed down a lot of rice.

He loves to eat from chopsticks.

Saturday was quite the busy day. We spent the morning running errands at the Beer Store, Home Depot, Rona, and Ikea.  Normally I feel I could have done these errands in 2 hours max but having a toddler (and pregnant wife) in tow meant it took the full morning.  We then returned for nap time.  There was a lot of fussing and crying but I eventually got Melina down for her nap.  I then took to the business of seriously cleaning out the garage.  Which meant when Melina woke up she saw this surprising sight.

The car has not seen the inside of the garage for over a year thanks to renovations.

After I finished cleaning the garage I came inside and Melina and Henry were still asleep.  I decided to lie down and about 2 seconds after I turned on the TV Henry woke up.  I swear that kid can sense when I am relaxing.  So it was back to work.  I finally put up the moulding on the bathroom door, fixed some kitchen cabinets that were off kilter, and put together some Ikea furniture.  We then Headed to Aylmer for Easter with Melina’s family.

Upon arriving in Aylmer Henry was immediately faced with the challenge of competing with his cousins for Easter eggs.  Henry quickly rose to the challenge managing to grab four at a time with one hand.  The hilarious thing is that Henry still hasn’t realized that the eggs are chocolate.  He just thinks it’s a game to find foil wrapped eggs.   I have a feeling next Easter hewill have clued in and actually expect to eat the eggs.

Dinner there was great.  Melina’s Aunt Odette and Uncle Daniel made a wonderful Italian meal.  There was homemade gnocchi, cannelloni, penne, and one of the best Caesar salads I have ever had.  It had anchovies in it which made it very tasty.

Sunday morning we didn’t get up much.  Henry and I went for a walk through the park.  Since it was just a short walk I decided to leave Ginger at home.  I think she now hates me.  At 10am I tried putting Henry down for a nap since we were due in Almonte by noon and wanted him to nap first.  I lay down with him because I was tired too, and I thought it might encourage him to nap.  Instead what happened is that Henry ended up quietly playing in bed next to me.  However, once I fell asleep Henry decided it was time to poke me in the  face and crawl on top of me.

Once it became obvious that Henry wasn’t sleeping we headed out to Almonte.  Henry was in for a surprise because the Easter Bunny was there right before us so it was time for another Easter egg hunt.  Henry took to it like a champ.  Josie even helped him out which was a good thing because they were competing against the dogs who found some of the eggs and gobbled them up.

We then had a wonderful lunch talking about the trip to France that we are missing because apparently it’s not a good idea to book plane tickets two days before the baby’s due date.   After lunch we headed home.  Henry immediately passed out in his car seat upon leaving the driveway.  We ended up taking the long way home so he could sleep some more but he ended up staying sound asleep even once we got home.  He then woke up and had a bunch of meltdowns until we put him down for the night.  I had to try twice but apparently Melina had the magic touch because she ended up getting him to sleep. 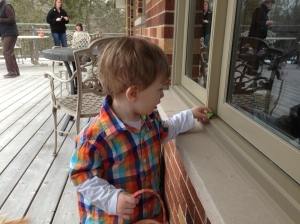 Adding it to his stash

Check out the haul

This morning I made Henry pancakes.  He was so touched he pushed the plate aside because he obviously though they were too magnificent to eat.  We then sneaked out to the Sippy Cup café so Henry could play and I could get my caffeine fix while Melina slept in as she wasn’t feeling well.  Melina was able to quickly deduce where we were (might have something to do with the fact that I checked in our location on Facebook).  She decided to join us and ordered a bagel and cream cheese which must have not been magnificent because Henry ate most of it on her.

We then headed home but only for an instant because we decided to go for a walk at the Old Quarry trail by Hazeldean and Eagleson.  We first stopped at bulk barn to stock up on some birdseed as we heard the birds there fly into your hand to eat.  We then hit the trails.  We walked about a kilometer in and didn’t even hear a bird let alone see one.

Heartbroken due to the birds shunning us.

They must have just needed a little bit to warm up to us because once we started to walk back the chickadees started to swarm us.

Some deer even started to approach us but once they realized all we had was bird seeds they quickly left.

The deer telling us to bring apples next time

This was the best part of the walk for Henry. A big puddle to splash in.

Well that’s about everything.  I hope all of you had a happy easter.