Well, good news, the baby is no longer breech. When I went to my OB/GYN appointment last Wednesday, she felt my stomach and was pretty certain he had flipped to the cephalic position (that’s head down for non-doctors). She sent me for an ultrasound on Friday to make sure since she didn’t want me to go all the way to the hospital for a procedure I didn’t need (which was booked for tomorrow). Anywho, on Friday, I went to the ultrasound clinic and the super nice Scottish technician (who was a former midwife) checked right away and cheered the second she saw he was head down. She seemed even more excited than I was. I guess she had assisted in a few versions back home and knew it could be very painful so she was happy I could avoid it. I’m super overjoyed by this news.But then it got me thinking about everything else that’s about to come. I’m starting to panic a bit about labour. I know it hurts, I’ve been through it before, but I’m still scared about feeling that pain again. Today I had a scare where Chris was out bringing stuff to Value Village and I was with Henry at home. I got this sharp pain in the side of my stomach and I felt like I was paralyzed. Henry and my phone were out of reach and I had to basically force myself up and breath in and concentrate on getting through the pain. When it finally subsided, Chris was pulling into the driveway. It lasted all of 5 minutes but it scared the crap out of me. I really hope Henry’s at daycare or fast asleep when labour kicks in, and that Chris is at home somehow.

Well let’s more on from there to what we did this weekend. With less than 3 weeks until my due date, I’ve been trying to cram in as many activities and chores as possible. We did a bunch of stuff this weekend. We went out on Friday night to Almonte to have some Indian food with Chris’ family. Saturday morning, we went to the Sippy Cup cafe, very early and then had some visitors. Steph showed up with Logan and Niko. Steph and I had to go to Best Buy to sort out a gift card debacle that I got her for her birthday. I had bought the card at a pharmacy (cough SHOPPERS cough) and found out afterwards that those cards were void. Short story long, Chris ended up babysitting all 3 boys while we went to Best Buy. When I got back home he said it wasn’t that hard, which I took to mean “I want a 3rd child” but apparently that’s not what he meant.

We tried getting Henry to nap in his big boy bed yesterday which ended up with Chris having to lay down with him until he fell asleep, and when he woke up, it was freak out central. This transition is going to be a bit harder than we anticipated.

Today we went grocery shopping and price matching (I’m at a savings of over $350 in less about 2 months time!) We also went and bought a sand box for Henry at Toys R Us for this summer. I’m trying to make our backyard into a fun zone for Henry since I’ll be keeping him home twice a week when I’m on leave. We also went for a great walk around the block with a quick stop at the park. Henry seemed to both love it and hate it. I think the hate part though has more to do with the cough he developed last night and turned into a full blown fever this evening. I’m hoping it’s gone by tomorrow.

And now pics of our weekend!

So when I look at this picture, I think “Tin Man” and Chris thinks it’s more a like a fighter pilot. I wish I was right but I have a feeling Chris is closer to the truth on this one.

The boys looking at Chris before they sacrifice Ginger to the gods. Logan looks like he’s telling Chris “You’re next buddy!” 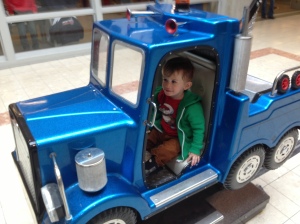 The saddest easter bunny ever. Should have known at this point he was getting sick. 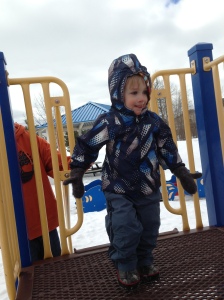 This cheered him up a little.

From the noises he was making, going down this slide was both exhilarating and terrifying.

Not too terrifying though, since he kept going back for more.

Safer to go down with Daddy by his side.