We did a whirlwind of activity this past weekend. I know I should be slowing down, especially given that I’ve been experiencing contractions in the evenings but there’s this stubborn part of me that just wants to get so much done before the baby arrives. Saturday was the craziest. We woke up, went to Henry’s gymnastic class at Starr Gymnastics. He had a great time. He had been “off” the past couple of weeks but he was in full form this time. Running around, swinging from ropes, having a general blast.

We then decided to hit up Ikea right after since we were in the neighbourhood. We had a $20 coupon expiring on February 28th (from the christmas tree we bought) and also were looking to buy a new mattress for Henry’s bed and they were having a deal of 15% back in gift cards for mattress purchases. We also got some storage solutions for Henry’s bedroom and a new dresser for the baby. In total we saved about $50. It satisfied the new Price Matcher in me. The whole time in Ikea, Henry again was in a great mood. He was running around, giving us hugs, telling us he loves us. It was great.

That afternoon we drove out to Almonte for our niece Josie’s 4th birthday. Again, Henry was going crazy. He kept trying to flip himself over a balloon on the sofa. Everyone  got to see how daring he can be.  He seems to really have come out of his shyness bubble so he was super chatty and laughing the entire time. We then went from Almonte to Carp for dinner at the Swan to celebrate my father in-law Marty’s birthday. Again, Henry was super well behaved. Better than the two adults who kept spilling their beer glasses all over the table (don’t worry, I won’t name names J )

We got home around 8pm and he slept from then to 10am. Amazing! After breakfast we went out shopping for Henry’s friend Luis’ birthday present and then met up with our friends Doopah, Nat and Danick for lunch. Again, the whole time, Henry was pretty great. He was super affectionate and loving. I couldn’t believe my eyes at how grown up he was acting.

We got home, had a nap, then got up and Henry just ran around the house like crazy trying to shove Ginger’s tail in a tupperware container. We have such a good, patient , tolerant dog… I kept trying to take picture of him in a frenzy but the pics were always blurry. I guess it demonstrates how much he was moving.

The weekend caught up to him though and he was in bed by 6:30 by Sunday night.

Monday morning he woke up in a great mood and there was absolutely no freak out at drop off time at daycare (which has been a constant occurrence for the past 2 weeks). I was so relieved. I’m hoping we’ve turned a page on the terrible twos. If not, at least I know this little well behaved angel is in there somewhere.

Ginger’s keeping a close eye on Henry and the tupperware he was trying to contain her tail in. 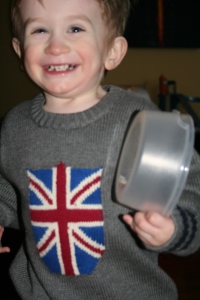