Henry attended his first Winterlude this weekend. The last time we went was the weekend before he was born. I think Henry’s little brother wanted to make an appearance based on the random Braxton Hicks contractions I was feeling but I told him “no way, you’re staying in there for at least another 5-6 weeks”.

We went to gymnastics first and Chris’ dad Marty came along for both gymnastics and Winterlude. Henry was a bit cranky at first but then seemed to warm up once he got his hands on coloured ice blocks.

Why are we here? Why is it so cold? 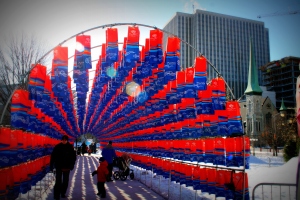 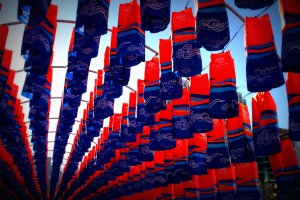 I just loved staring at these.

trying to get a smirk out of Henry. It was pretty tough. 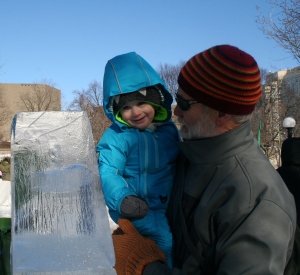 This statue got a bit of a smile. 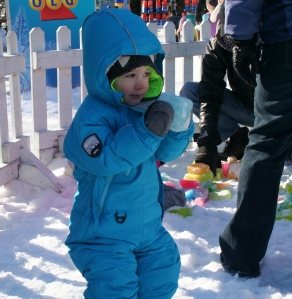 Check out this awesome blue block… (if you look closely enough, you can see the mischief in Henry’s eyes while he’s holding that block of ice)

and toss…. At least in this picture, he was tossing it on the ground. Originally he was trying to get it as close as possible to a little girl building a castle.

Watching maple syrup being made.

First time eating Beavertail. It was a huge success.

This was my favourite sculpture of the Crystal garden. And the sculptor is from Ottawa!

We only ended up staying for about an hour before Henry started fading fast so we headed back to Kanata for a quick bite at the Barley Mow and then came home for a long nap. Henry’s been sleeping like crazy lately. Thursday was a 4 hour nap, yesterday he slept for over 3 hours and today he slept 13 hours overnight then took a 3 hour nap again. I think he’s going through a major growth spurt. Hoping he sleeps in tomorrow since I’m off with him for family day.