Well my little man is now 2 years old. How time has just flown by. It seems like just yesterday I was waking up Chris around midnight saying “either I just peed in the bed or my water broke”.  It’s like every moment of that day is frozen in my mind. The pain, the fear and then the euphoric joy as they lay Henry on my chest. How he wriggled himself up to nestle his head under my chin and settled in. I remember, after holding him for a few seconds, letting him know I would go through that pain all over again for this one moment. I remember the look on Chris’ face when he held his son for the first time. I remember my mom getting teary eyed after having witnessed her grandson’s birth. I also remember the crazy commotion that came after he was born given that no doctors were in the room when he decided to make his entry. Just so much fluttering around while Henry and I remained still.

Now the last thing he wants these days is to remain still. Sure, when he’s sick (like he was last weekend), there are moments of stillness but for the majority of the time, it’s go, go, go.  It’s hard keeping up with our little tornado but we try. I keep trying to picture what he’ll be like. He’s obssessed with sending objects flying by hitting them with a stick, so I think “He’s going to want to play baseball!” but then he’ll hop on the piano and start banging out a tune and I think “my little rock star!” I guess I can only wait and see but it’s fun trying to guess. 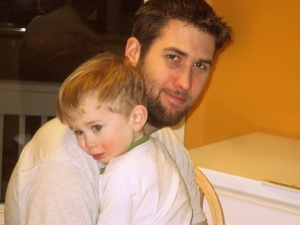 First morning as a two year old was rough on the little guy.

We got Henry a toy shovel and toy broom. I know that sounds boring and that we’re putting our kid to work, but he loves this kind of stuff! 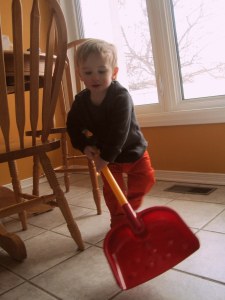 Practicing my shoveling technique. It’s all in the wrist.