Sometimes You Wanna Go Where Everybody Knows Your Name January 15, 2013

I find those lyrics so true. I’d love to find a business where I can walk into and they say “MELINA!!!” I used to dream of becoming a regular in a local pub, where the bartender knew my order and it would be waiting for me. Well nowadays, I’m refocusing those efforts on a local coffee shop near our house. About a 3 minute drive from our place is the “Sippy Cup Café”. It’s a coffee shop/children’s play area. The front is all swanky and modern and great for adults. The backroom is filled with toys and stuff for kids to climb on. Henry loves it and so do we. Henry’s a bit of an early riser on weekend. By the time regular stores are open, say around 10ish (11 on Sundays), Henry’s been up for hours and itching to get out of the house. Luckily the café opens at 8am on weekends. The owner, Preston I believe, is usually there and always cheerful. He’s great with kids too. While we were there on Sunday, there was a little girl who was very very shy, he asked her if she’d like a special stamp on her hand to make her feel better and she said yes. Once she got the stamp, she just loosened up and was playing with Henry and this other little boy.  It’s great that we get to order swanky coffeehouse type drinks and snacks and still supervise and play with our kids since you can order anything from the kid’s side as well. It’s like the best of both worlds.

We were also told that they’re going to be installing a new “date night” program where you can drop your kids off in the playroom with a babysitter and then sit down on the “adult” side and have a 5 course meal and just relax knowing your kid is 20 feet away.  If anyone’s tried having a meal with a toddler in a restaurant, you know that this is a pretty sweet deal.

I’m not at the name recognition phase yet but I saw some regulars get their name called out as they popped in to pick up a coffee for the road so I’ll work on that. Anyways, just wanted to write a post to promote a great local business that “gets” children and their needs but also know that parents like to chill out with a nice latte or hot chocolate before tackling a very long day. 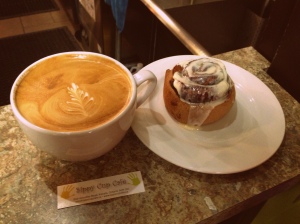 look how delicious this looks! That cinnamon bun did not last long! 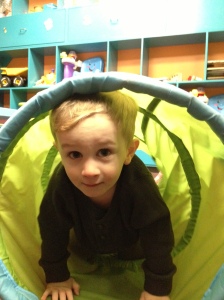 Tunnel time! Henry used to be terrified of this toy, now he loves it. 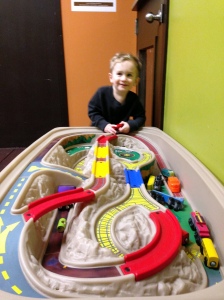 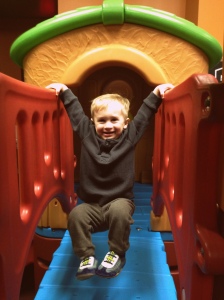 swinging from the play structure.

Hope you can make it out there one day!