Thought I’d do one more post today since I haven’t done any in the past two days.

Lately I’ve been having severe boughts of baby brain. It’s been pretty bad. I know people joke about it but I took it to a new dangerous level the other day when I completely forgot to put my seatbelt on while sitting in the passenger seat. I only realized when we got to our destination and I went to unbuckle myself only to realize it was never buckled. I had a mini freak out imagining all the damage that could have incurred. I seriously need to focus more!

A few weeks ago, we were watching Modern Family and the running joke was how bad Gloria’s baby brain was. I remember telling Chris “that’s just freaking insulting! Pregnant women aren’t that affected!” and then since then, it’s been a steady slow decline for me mentally where I will stand in one spot, frozen, trying to remember what the hell I was doing there in the first place, knowing there’s something in particular I was hoping to do but for the life of me cannot remember.

–          I almost walked out of our local coffee shop without paying and had to be reminded by Chris that “we can’t leave without paying!” as he struggled to put Henry’s boots on.

–          After dropping off Henry at daycare last week, I then proceeded to drive myself halfway home before remembering “oh no wait, you have work today!”

–          I’ve driven myself halfway to the park n ride before remembering Henry’s in the backseat. Luckily, if we miss the turn for daycare, he usually speaks up. I’m saddened to say this has happened more than once.

Like I’ve said, this doesn’t count the number of times where I’m just frozen in place wondering what I was about to do. I’m trying to make sure I don’t leave things on that could burn the house down. I don’t iron any clothing anymore (ok, I rarely ironed before, but now I’m making a point not to in case I leave it on). I have to check and recheck what I write or do at work to make sure an email I’m sending out doesn’t include my grocery list or something. Chris says that I should have a piece of paper pinned to my clothes with my name and Chris’ cell phone number just in case I end up wandering lost somewhere.

Oh and I let this happen on my watch: 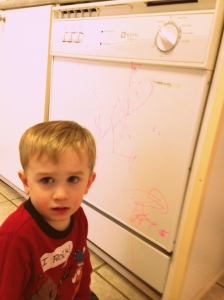 I thought the dishwasher would look better in pink

I was making food and knew Henry had a highlighter, knew he was being too quiet and also knew he was leaning up against the dishwasher. Despite all this knowledge, I didn’t clue in that this was what he was doing…

One Response to “I’m With Stupid”