Filed under: Uncategorized — frombeantosprout @ 10:52 am

Sorry for the blog silence in the past couple of weeks. It’s been one crazy day after another. We’ve kind of been catching our breath after all the wedding related activities of the summer and enjoying being a bit disconnected from the world.

Also, for the past two weeks I’ve been trying to put together a stupid photobook from a Groupon I purchased back in February and which is expiring on August 22nd. I won’t name any specific names, but the photobook company has to have the most unfriendly user software I’ve ever seen. It’s been an uphill battle trying to put my “2011” photobook together. Next year, I’m going with Shutterfly.

Anyways, I’ll try and make a few posts instead of jamming everything we’ve done in one. So let’s start with fun at the splashpad!

We discovered a splashpad near our house that Henry loves. Unfortunately, it’s not the actual splashpad that’s awesome for him, it’s the little hill that he can run up and down endlessly.

Meh, I guess this is cool…

unenthusiastic “hurray” for water coming out of this tube

Henry was somewhat curious about these until he decided to run through it, then panicked and stopped while jets shots him in the face. This could be why he wasn’t impressed with the pad itself.

Getting consoled by mommy after the terrible jet incident 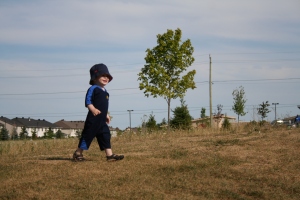 Running up and down hills is much safer…

There’s the happy face we were looking for!