This entry is in hopes to keep a record for the future of humanity, should the world survive this plague.

It all started 5 days ago. The morning after our friend’s wedding, Chris went to pick up Henry and brought him home. He was definitely off. Warmer than usual. I should have seen the warning signs. I thought it was just the exhaustion of having spent the night elsewhere. I was wrong.

Over the past 4 days, things have been worse and better at the same time. The fever left but his eyes started crusting over. He was just leaking goop from every orifice.

I thought with the fever past, the worst was over. It had just begun. The disease spread to Chris. I came home last night from an evening out with former coworkers to find him in bed at deaths door.

Despite the temporary blindness, Henry seemed well enough to go back to daycare (no fever for over 24 hours) so I brought him to daycare. Chris had to pick him up at 1:30 for his 15 month vaccines. Our pediatrician then confirmed that on top of the nasty virus Henry was fighting, he also has a double ear infection. Frigg.. 10 more days of antibiotics which cause explosive diarrhea. Fun! 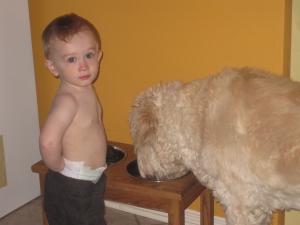 One Response to “Outbreak Chronicles Day 5”