Today was my first day of work in over a year. I last worked a full day on January 14, 2011. For the past year I’ve woken up with Chris at around 5:30 to feed Henry but was able to go back to sleep until 7:30-8:00 sometimes. Not anymore. I got up at 5:30 and got slowly ready for the day ahead. We woke up Henry at 6am and I think he enjoyed the novelty of the early morning, not fully understanding what what happening.

On a side note, I’m so lucky to have a hubby like Chris. Henry and I came downstairs and Chris had Henry’s breakfast all ready with some pieces of bread and cut up strawberries. It was one less hassle to worry about on a morning full of hassles.

I dropped Henry off at 7am and as I was handing him off, he decided to poop. You could smell it during the hand off and I thought to myself “oh, they’re totally going to think I chose not to change his diaper until he got here and they could do it”. I didn’t linger too long. The daycare provider advised that it’s best to make drop off as quick as possible and not to make a big deal about it. It’s also important that you say goodbye and that the baby sees you leave. So I smothered Henry with kisses and told him I loved him and that I would see him this afternoon then left. As I walked to my car I had to keep repeating to myself “you’re wearing mascara, DO NOT CRY!!”

I decided to drive myself to work since I had a bunch of stuff to bring on my first day back. I got there at 7:30 and had a pretty warm reception. I knew that’s one thing I could count on. Another bonus is that the manager I thought was leaving is in fact sticking around so I’m excited about working for him.

The day kind of flew by. I had almost 1500 emails in my inbox. They forgot to deactivate my account when I left so I had so much crap to filter through. I also got a really great welcome back Starbucks hot chocolate from my coworker Ranbir which was very appreciated!

Anyways, like I said, the day flew by. I called the daycare around 2pm to give them my work number and they told me that Henry was transitioning really well. They even said that he was one of the better transitioners and told me that it was a sign of good socialization when he was younger so I gave myself a little pat on the back when I heard that. Unfortunately though he didn’t seem to want to nap. He slept from 11:30 to 11:50. I’m hoping tomorrow is better. Chris went to pick him up in the stroller and walked back and he slept the whole way home. We also put him down for the night at 6:30. He was just exhausted. When he saw me when I got home he gave me a great “welcome home” smile that melted my heart. I love that little guy so much!

Having breakfast... or as George R R Martin would write "Henry broke his fast on strawberries and bread" 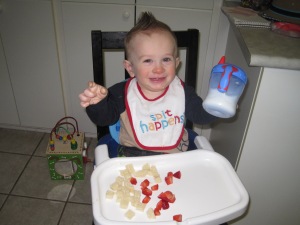 an unsure smile for the camera

Can we go back to bed?