Chris stole the glory of my 200th post! I knew I was getting close and after he hit publish on his “hacked blog post” it said “Congratulations, this is your 200th post”! and Chris bragged about him not even being aware that he was writing so often but thankful that WordPress recognized his efforts.

Anyways, Christmas was a bit of a blur. I often chose not to take my camera out and just enjoy the moment (and the madness). Henry seemed to like Christmas as well. One of his favourite things was a HMV gift receipt that he found on the ground and just kind of clung to it for a few hours. I won’t list all the things he got since I believe there’s a word limit on these posts, needless to say, he got a lot of stuff. It’s kind of spread out across 3 levels of our house. Both Chris and I got gift certificates to Ikea in hopes of remodeling our kitchen however we’ll probably use them to buy some of their Trofast storage systems.

Anyways, we had a great Christmas and looking forward to the new year (minus the whole going back to work thing). Here are a few more pics from over the holidays.

Opening a gift on Christmas Eve Eve. Notice Chris' new glasses. Took 9 years of pestering but I finally got him to get a new pair.

Showing off my spa results. Got my eyebrows threaded for the first time instead of waxed. 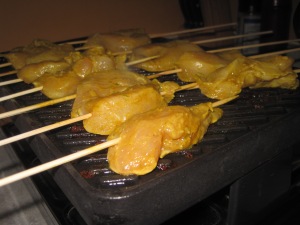 Preparing Satay appetizers for Christmas Eve. All the food there was delicious. 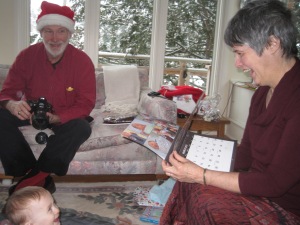 Chris took this pic and I love it. We made a few calendars with pictures of Henry for each month. Look at the smile on his face as if he's saying "Yep, that's from me!" 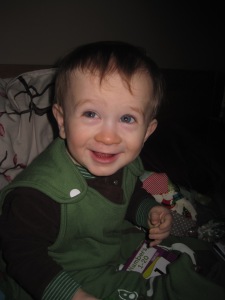 After opening his stocking on Christmas morning. 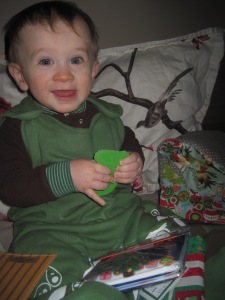 Look at all the stuff I got!

Playing with a new toy on boxing day

Destroying the little castle I built with his new wood blocks as Ginger looks on. Sidenote: Ginger seems to be lurking in the background of most of my pics of Henry these days. She just kind of follows him everywhere in hopes of receiving food.

We have more celebrating coming up. A family party on the 30th, my mom’s birthday on the 31st and Chris’ uncle Dennis is in town so we’re hoping to see him sometime this weekend. Next weekend we’re in sunny California. Ginger will be going to my mom and stepdad’s house and the cats will spend some quality time with their good pal Jenny who comes over to look after them (they’re a little too neurotic to go to a kennel, we’d have to give Purrl prozac so it’s easier to have someone come to us).