Yep, Henry is now ten months old. Two months away from a full year. He’s growing into his own person. He’s hard headed like his mom, inquisitive like his dad and loves smiling to any passing woman. He’s a huge flirt! I find his aging a tad bittersweet. I’m happy he’s becoming a little guy who can communicate with people however I miss the little tiny thing that couldn’t support his own head.

Things that Henry has learned in the past month:

– Standing on his own and moving a few feet while assisted by the support of a coffee table.

– Speaks a few words now such as mama, dada, allo, encore and something that sounds like Ginger but not sure

– Knows a few signs, like the one for dog, he can wave hello, give high fives, used the sign for lights (he’s fascinated by them) and the sign for milk.

– Will lie on top of Atticus and rub his fur while Atticus looks at him in disgust but does nothing about it.

And this monthly post isn’t complete without the before and afters. I’m doing it in two month sequences this time. 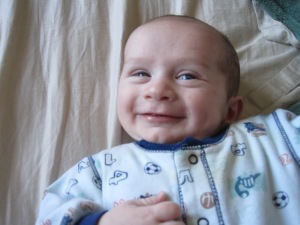 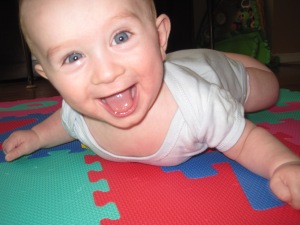 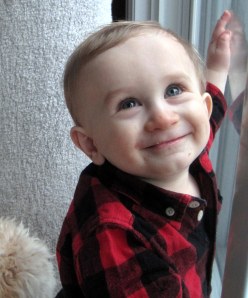 celebrating his 10 month bday with his best bud Ginger

One Response to “10 Months Old”