The official countdown to Christmas has begun. I’m usually cuckoo for Christmas and a bit over the top in my decorating, like having a huge tree filled with ornaments, garlands everywhere, etc. This year we’re going for a bit more subdued theme. Chris has been harassing me for years for a Charlie Brown type Christmas tree. Not necessarily a sad pathetic looking thing but on a similar scale. I’ve always said no because, well, I don’t like the idea however I was willing to concede on it this year and we will be getting a tabletop Christmas tree. Although Chris may think he’s won on this, the main reason we’re going this route is that I really don’t want to be constantly playing defense against Henry has he tries to climb/destroy the Christmas tree. I feel like next year he’ll be old enough to understand not to destroy the entire thing. It’s kind of like killing two birds with one stone.

Although I’ve agreed to the small tree, that hasn’t stopped me from wanting to decorate the rest of the house (above chest level). I wanted to make something crafty for Christmas and started perusing Pinterest and really got into the idea of making a yarn and felt wreath. I wanted to make pretty much the exact same one found here,  so yesterday I went to Michael and bought a hay wreath, a ball of yarn and some felt sheets. I had a few buttons lying around at home as well. For those who want to make one of these, let me warn you, wrapping yarn around a wreath is a long crippling process. My hand was like this weird claw shape when I was done. I’m really happy with the way it turned out though: 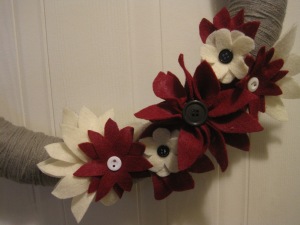 closeup on the felt/button flowers

While at Michael’s I popped into the HomeSense store next door and fell in love with this little guy and had to  bring him home.

I'm glad to be a part of the new Christmas collection

1- Love Actually (I can’t get enough of this movie, I love it every single time I watch it)

2- White Christmas (I’ve been watching this one since I was a kid. My sister and I love singing the “sisters” song)

3- National Lampoon’s Christmas Vacation (best scene: when they run out of the living room terrified of the squirrel and it’s actually on Chevy Chase’s back. I laugh every time).

5- Die Hard (yeah, I consider this a Christmas movie, so sue me)

6- Elf (this one is a new addition. I originally hated it but it’s grown on me).

I think that’s all. I might be forgetting a few but these are the core ones.

Finally, if you’re looking for possible gifts for Henry, or the baby in your life, may I present the following suggestions.

Spoons are always fun to chew on

Also not pictures: a hairdryer diffuser, a soft toothbrush, a foot massager and pretty much anything you don’t want him to get his hands on.

3 Responses to “Countdown to Christmas”