You WILL Tell Me The Location Of The Microfiche October 28, 2011

Lately I feel like I’m constantly struggling with Henry physically.  You’d swear I’m torturing him for information some times. I keep having to remind him “Henry the Cold War is over dude, relax!” My arms are often sore by the end of the day just by trying to restrain him all the time. He’s always pushing away or squirming around when I carry him. He fights me on most things like putting him in a car seat, putting him in the stroller, getting him dressed, feeding him, putting him down to sleep.

The most recent, and I must say most frustrating battle lately though has been when changing his diaper.  The second I put him on the change table, he rolls around. Often he’ll be mid diaper change and will flip over, bum in the air trying to crawl away. I figured out this weird way of snapping on the cloth diaper as he’s in a crawl mode but it’s really hard to do and I just wish he’d lie still for 2 minutes, just enough time to make sure pee doesn’t get everywhere. I thought I was stubborn… Henry puts my stubbornness to shame. It’s like he inherited mine and multiplied it. 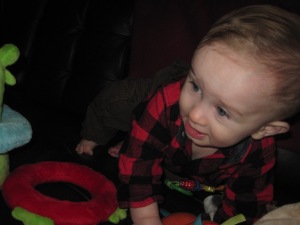 Oh I'm a lumberjack and I'm ok, I sleep part of the night and sometimes during the day.