Since my written diatribe against Henry’s sleeping patterns, he’s all of a sudden become a good sleeper. The night after the one from hell, he slept 9 hours straight waking up only around 4:00 for a feeding. Last night he went down at 7 and slept until 2:30. We’re convinced he woke up because of the massive thunderstorm outside. He cried it out a bit and went back to sleep until 6am when I fed him. He then slept until 8:30!!! What the what? I’m super happy he was able to go 11 hours between feedings. Now the big issue is that he sits up in his sleep and sometimes even stands up and cries. My friend Katie Jackson sent me a message the other day which was basically an email her friend had sent her about her experience sleep training her daughter. It sounds like pretty much the same thing we’ve been doing except she had an answer for the whole “sitting or standing” issue which felt like the missing piece of our puzzle. So last night when he started crying, I waited 10 minutes then went into his room to find him sitting and crying. I lay him down and said “Henry, dodo” and walked out. He was not happy about this. I did it a few times, each time putting him back down and saying “dodo”. Eventually Chris went in and did it as well and he fell back asleep.

Today I started Henry’s baby scrapbook while my sister was over working on her oldest son Logan’s baby scrapbook.  We had fun but it was tough to do more than 2 pages each with Henry and Niko with us.

And now some pics for those who were requesting more recent ones (I’m talking to you Ralph!)

What do you want from me? I'm a baby!

Pets hanging out on the floor

This is my "pick me up please mommy, I'm ever so sad" look.

Great smiles (although Chris is looking a little devilish) 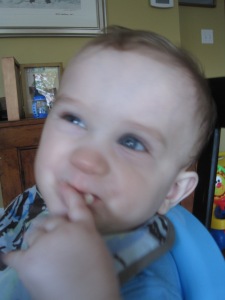 Let me think on this a little

Pouty face!! Or poop face, I'm not sure.

Playing with his favourite toy. He throws it across the floor then fetches it. We finally have one member of the family who can fetch (Ginger is useless when it comes to fetching).