Filed under: Uncategorized — frombeantosprout @ 10:35 am

Last night we would have liked to go to our friend Derek’s film premier at the Mayfair theater however it’s hard to find wet nurses on Kijiji so we had to miss it (bummer). I’m sure it went splendidly though and you should keep an eye out for his films with Say Ten Productions since I have a feeling he’s going somewhere with these.

We still wanted to do something, just not something too late so we went to the first day of the Carp Fair. Given that Chris and I are frugal, it makes sense for us to go on the first night since it was only $2 each. I was so excited to show Henry the fair but he was unimpressed at first:

Why am I here?

He started to warm up as we walked around.

The Ferris Wheel (invented for the Chicago World Fair… Thanks Book Club!) really got his attention: 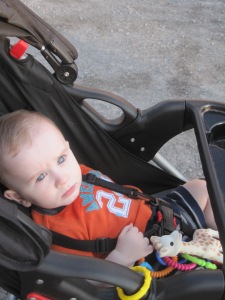 That thing doesn't look safe at all!

He seemed a bit more interested in the animals

Take my good side 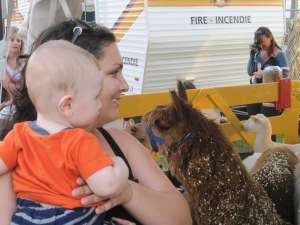 I love how this horse is starring down Chris while he takes the picture.

We couldn’t stay very long since Henry started crying around 6:30 since it was close to his bed time. I think the lights and screaming from the rides got to him as well. I was able to get what I wanted out of the whole visit by getting some mini donuts!! Damn those things are delicious! I get them once a year (usually at some fair) and could eat a ton but limit myself to a bag. I also got some french fries and Chris said “you know, when Henry’s older and we go to a fair, you’re going to have to show some restraint and we’ll let him get only one junk food item”. To which I answered “I guess I”m going to be the cool parent then” and then proposed to future Henry at a fair “Do you want to go eat carrot sticks over there with your father or do you want some mini donuts and cotton candy with me?”… 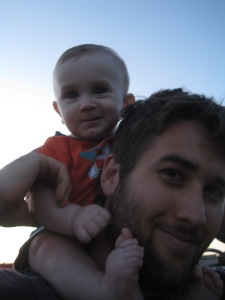 One Response to “Fair it Up!”