Filed under: Uncategorized — frombeantosprout @ 9:45 am

Quick hit the pause button, it’s going by too fast!!  My little man is growing up so quickly. To celebrate his 7th month, he’s decided that his hair will stick straight up from now on. I tried smoothing it down but it pops right back up. Chris thinks it’s a serious case of bedhead.

Things that Henry can now do at 7 months:

– sit for a really long time. He’ll sit up and kind of do this sit-hop thing where it’s like he’s seat dancing (something I excel at in the car).

– grab Atticus.  This is one of his newest games where once he catches Atticus’ flicking tail, he shoves it immediately in his mouth. Atticus kind of gets up and moves about 2 inches away all while giving Henry a look of total disgust. I pity that cat when Henry can start moving for real. Those 2 inches won’t change a thing. Oh well, at least he’ll finally be getting some exercise. 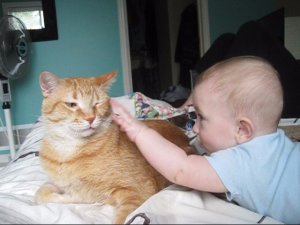 These are stills from a video we took.Notice the contempt our cat has for Henry 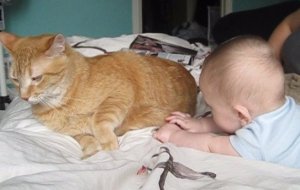 ugh.. I guess I'll get up then

As usual, here are my before and after pics for 7 months.

Henry at 3 days old. I get all emotional now when I look back at these older pictures. 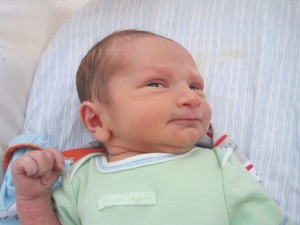 his "Say what?!?" look perfected at just a few days old. 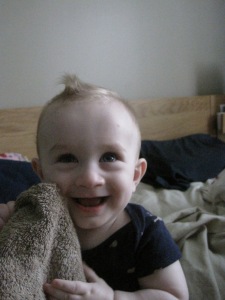