Filed under: Uncategorized — frombeantosprout @ 9:12 am

I don’t know if this is because I’ve been at home for over 6 months now, since mid-January, however I find myself more and more dissatisfied with the way our house looks. I’m not sure if changing all our windows prompted it but now I keep seeing things in our home that I’d like to change. I half wonder if it’s because I didn’t really see our house as a permanent home until we spent all that money on windows, now I know we’re here for a while longer.

I also blame my friend Caitlin who once shared this blog with me:  Young House Love which I find totally inspiring.

A lot of things in our house has an “eau de 90s” feel to them. A lot of our light fixtures are gold and a tad gaudy. We’ve replaced two bathroom lights so far but I wouldn’t mind replacing a few more. Including finding a nice light for our dining room, maybe something that hangs down a little bit.

I’ve mentioned to Chris things I wouldn’t mind changing and he’s kind of against it since he says whenever I want something changed, it usually involves a lot of work on his behalf. I feel I’d like to learn these things as well though so that I could do them myself someday.So before Chris read this as a “to do” list, this is just a wish list of things I’d like to eventually change, not a “these are your weekend chores for the next 6 months” as he’s put it.

1- The bathrooms. I’ve had issues with some of our bathrooms since day one. I’d like to replace the counter in our bathroom that is this ugly blue speckle color that must have been the cheapest for the company that built the house. It’s one of those colors that doesn’t match anything. I’d like to replace it with just a plain white counter to give it a less dated feel.

I also want to sand down the walls of the powder room. The previous owner was a little crazy decorating wise and put this stucco stuff all over the walls and ceiling of the powder room, then stenciled a trellis and vines with grapes climbing the trellis. Almost like the powder room was her French villa escape. When we moved it, we painted over it (and all the other crazy stencils in the house) but we didn’t sand down the stucco stuff first, so now we have an textured orange/terra cotta bathroom.Once it’s sanded down, I’m not sure what colour to put it there. Something a bit calmer maybe.

I would like to replace all the toilets in our house with dual flush type ones.

I’d also like to tile the upstairs bathrooms, both the floor and re-tile the showers, especially the main bathroom shower since it’s in major need of repair.  For the tiles, I want something again that will look timeless. In the main shower there’s like this weird pink and blue flower motif on some of the tiles.

I’d like to pain the both vanities in the upstairs bathroom to a bit more modern colour. This one is easy to do and I can probably do it myself in a weekend. I’d replace the hardware on the doors as well.

2. The living room. In my early to mid-20s I was a huge fan of bold colours for decorating. I’m finding my tastes have changed recently. When we first moved it, it was very hip to have a super bold accent wall and I went as bold as I could with a bright red wall and yellowish-beige contrasting walls. Again this is feeling quite dated now and I find it a tad too eclectic now and hard to find items that would compliment the decor since the red wall takes away from everything else. If I had my way, I’d paint the whole room in a shade of gray however I’d be content for now in just painting the red wall over with the same colour as the other walls just to tone it down a bit.

3. The master bedroom: This one is probably the hardest to do and most likely won’t be done since it involves a lot of electrical work. Our bedroom is the only bedroom in the house that doesn’t have a ceiling light fixture. I really don’t understand why since both other bedrooms have one. I’d love to have an overhead light installed and would like even more if we had a ceiling fan however I have no idea how to go about creating a light fixture. I assume it would involve rummaging around the attic and playing with electricity which I’m not comfortable with either of us doing.

4. The backyard: The stairs from our patio door are these narrow rickety things that are loose and seem to be getting more and more dangerous as the years go by. It didn’t bother me that much until Henry was born and I started getting scared walking down those stairs with him and then started worrying about him walking down those stairs when he’s older.  I’d like us to make a set of stairs that are the width of our patio door and have a bit more gentle a slope. Also, because we like in a townhouse, our backyard, although bigger than most townhome backyards, is still small. I had originally wanted us to build a bigger deck however after thinking about it, it seems it would be much nicer if we had a stone patio instead. That way the patio would kind of bleed into the backyard making it look bigger and it wouldn’t block our massive window that looks out onto the backyard. Finally, I would like to add a shed to our backyard, nothing massive, just big enough to store gardening stuff, Chris’ beer making items and our extra storage items.

That’s pretty much it. I know it seems like a huge list, and it is. And like I mentioned before, this is just really a wish list for now and doesn’t have to be all done right away. Has anyone else on mat leave felt like this as well or am I just crazy?  Are you wanting a change in your home? What kind? I’m curious what other people have planned as home renovating projects and where they go to for inspiration/resources etc… 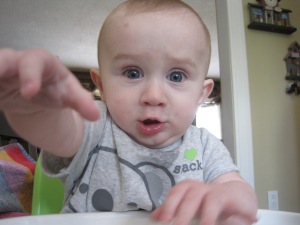 What do YOU want to change?