Henry’s a full  fledged hippy baby. It all started with the cloth diapers and now we’ve moved on to a Hazelwood teething necklace. I never thought this day would come but I’ve embraced everything about my hippy baby (Chris doesn’t believe the Hazelwood does anything but whatevs). 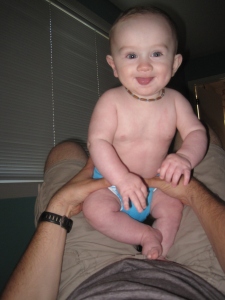 Let me align your chakra

As you can see, Henry has his tongue sticking out pretty much on a permanent basis these days. He can’t get enough of it. I’ve mentioned that I think Henry is a bit of a comedian, I’m pretty sure he’s going to be a class clown when he’s older. He just loves making people laugh. I anticipate a few calls from the principal’s office telling us that Henry once again was distracting the class. Just look at the pics below for proof. Just taking off his onesie is comedy gold to him.

You think this is funny don't you?