Right before Henry was born, like literally hours before, our friends Ross, Selena and their son Declan gave us a baby shower gift consisting of some pjs, some slippers and a gift certificate to Build-A-Bear. I had wanted to build a bear before Henry was born but he had other ideas. Anyways, time kind of got away from us and I kept forgetting about the gift certificate until today.

Henry LOVES dogs. He’ll stop everything he’s doing to stare and Ginger and talk to her so I thought a stuffed dog would be cool. Also, because I’m a hipster at heart, I wanted him to be wearing something funky, geeky, retro-ish. So without further ado, introducing Argo Woofstein the third: 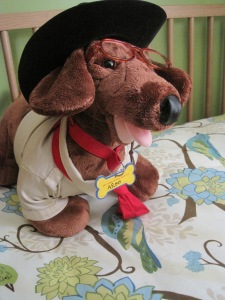 Argo is an Australian Outback Adventurer

Everyone loves a weiner dog with hip glasses right? 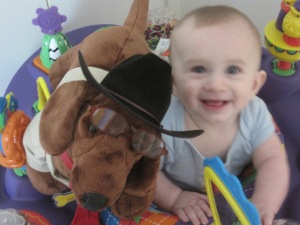 Thanks Selena, Ross and Declan!

One Response to “Newest Member of Our Family”