Today we found out that Chris’ dad Marty (aka Pops for Henry) was giving free healthcare to injured teddy bears. We thought we’d bring Henry’s bear for a treatment since he’s been a tad lethargic lately, he’s suffering from insomnia, his appetite has changed etc… We think he may be a bit depressed so we thought a visit to the doctor would be helpful. Turns out he had hurt his arm and couldn’t communicate it with us properly. Anyways, here’s the free clinic in pictures. I’d like to point out that we had to wait 30 minutes to see the doctor. That’s pretty good. I once waited hours to see my own doctor. Teddy bears are somehow getting better treatment that humans.

On the way to the doctor

Marty working on the patient ahead of us. That pooh bear was pretty close to being a goner...

Henry anxiously waiting for a diagnosis with Mr. Bear

Finding out Mr. Bear is going to be alright 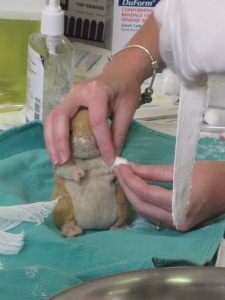 a bit of an aside pic, but I thought it was hilarious that this little hamster was getting an actual cast

Thanks for fixing Mr. Bear pops!

I got all flustered asking Officer Bear for a pic and actually asked if he'd pose for a pic with my daughter. Apparently bears in uniform intimidate me. 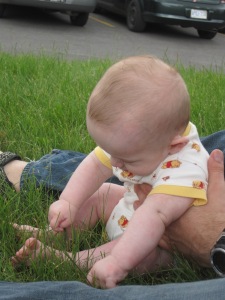 Henry playing in the grass 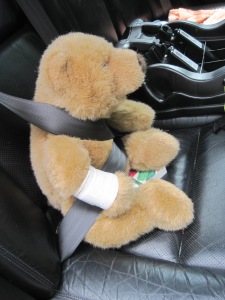 One Response to “Teddy Bear Picnic”