Filed under: Uncategorized — frombeantosprout @ 9:21 am

Last year on this date, I officially found out I was pregnant. I had had my suspicions beforehand but I confirmed it with a test on this date. I remember the very faint line on the pregnancy test and not being sure what that meant so I called my sister at 6:30 in the morning to find out what that means and I guess inadvertently made her the first person to find out…even before Chris, who hasn’t let me live that down yet. Thus began the summer of constant nausea, morning sickness and anxiety over every little thing. I was so sick that I turned down the opportunity to spend most of the summer working in Paris at the Canadian Embassy which was a shame but I’m glad I stayed here with Chris.

Anywho, back to present day. Henry got his 4 month vaccines yesterday and he was yet again a little trooper. As the doctor was examining Henry’s hips by pushing his legs towards his body, Henry started giggling like crazy. Why is he always in a great mood during vaccination days? It makes me feel worse about what’s about to happen. During the vaccines he cried a little but not much. His reaction to the vaccines this time around was much worse. I was up most of the night with him and he was burning up with a fever. I stripped him down to only his diaper since he was so hot. He kept moaning and would sometimes tremble all over. It was really sad to see. I gave him some baby Tylenol to bring the fever down. Thank god we has been told that this could happen after vaccines or I would have been really worried. Although now I know not to go to CHEO without having called Marty (Chris’ dad) first…. Marty, if you’re reading, it took all my effort not to call at 2am 🙂

Henry’s doing better today. He’s still a little warm, I gave him a second dose of tylenol this morning and he’s eating a bit more. I think we’ll take it easy today. Tomorrow we’re getting our windows replaced. I’m going to hole up in the basement with Atticus, Purrl and Ginger and try and stay out of the contractors hairs for the two days they’ll be here. It will give me a chance to clean up our disaster room, aka the computer room in the basement. 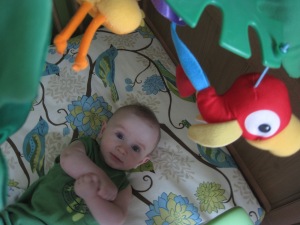 Last night we watched this YouTube video of a 8 month old baby laughing hysterically at paper being ripped. We decided to try it with Henry. He thought it was pretty funny. It’s amazing how something simple as ripping paper can be hilarious. I wish we had filmed it. I tried doing it again today and got a “heh” like “nice try mom”.