I’ve been a tad slow on posting this week. It could be because I have a baby growing out of my hip, or so it feels. Henry’s been incredibly clingy this week. In fact, I’m writing this right now with him asleep on me. What I thought was a problem with his play pen turned out to be just a form of separation anxiety. Two nights ago was hell where he’d wake himself up every 1 1/2 to 2 hours and wail until I held him and then last night he was fine in his play pen. I think he may have been going through another growth spurt. I haven’t had a major growth spurt in a while but I imagine they’re quite painful. I remember at 6 weeks, Henry had a pj that 2 days later didn’t fit him anymore. That rapid growth has to be tough on a baby who doesn’t understand what’s happening so in response to that pain, he becomes more clingy.  Now this is all speculation, but I feel it has a ring of truth to it. 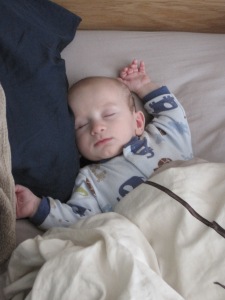 catching some Z's in the big bed...

I also noticed this week that Henry is going longer between feedings during the day. I’m grateful for it but at the same time, it’s another physical adjustment with my body as well and it’s not very comfortable. Hopefully everything will regulate itself soon.Another change I’ve noticed is that Henry has become even more vocal now. He’ll talk for 30 minutes at a time and if you’re not paying attention, he gets pissed off. He gets into this loop sometimes and just keeps repeating “hey, hey, hey, hey”.. it’s actually pretty cute. I didn’t think babies started chatting until 5 or 6 months so I was pleasantly surprised when he started chatting about a month ago. It’s great hearing him discover new sounds then running with it. 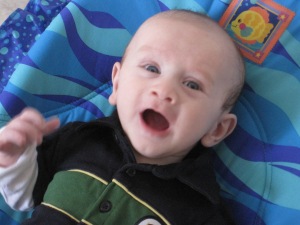 Hey, I'm talking to you!