I’ve been reading a bit about when to start giving solids to babies. It seems like the standard answer is 6 months however I’ve seen some studies that suggest you can start as early as 4 months with cereal. The prospect of feeding Henry solids at 4 months is both appealing and scary at the same time. It would be great if he’d sleep a bit longer through the night instead of waking up every 3-4 hours and I feel eating solids would probably help that but at the same time, I feel a strong bond with him while breastfeeding and I’m worried I’d lose that. For the moms that are reading, how long before you started solids?

I feel like every day now, Henry goes through these giant developmental steps. On Sunday, he tried grasping at one of his toys which was amazing to watch as he struggled to figure out how to move his hand to reach for the toy. He’s also trying to grab his feet now when he can see them. He’s a lot chattier as well. On Saturday night, we had gone to dinner at Gillian and George’s and on the way back, he chatted with Ginger the entire ride home. He says “HEY!” a lot which I’m convinced is his way of trying to get our attention.

We got a loaner Bumbo chair this weekend as well. Henry’s a little small for it since he doesn’t have complete neck control yet but he sat in it for a while as I supervised him. The pictures are kind of funny since it looks like he has no neck and the chair looks like a little torture device for now.

You can torture me all you want, I'll never reveal the location of the microchip! 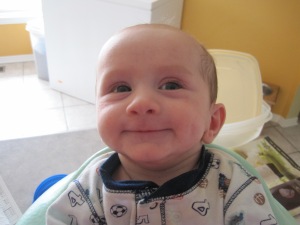 We had some company today as well. Our friend Jen and her daughter Charlotte dropped by for a visit. I always love hanging out with Jen, she’s so laid back. Chris and I have always said we want our kids to end up like hers and that we hope to be able to raise Henry as well as they did for Hailey and Charlotte.  Their kids just seem so well adjusted. Thanks for coming by Jen!

2 Responses to “Solids: When to start”