Filed under: Uncategorized — frombeantosprout @ 10:12 am

What a great weekend sleep wise. Chris played superhero this weekend and woke up early taking Henry with him, giving me the chance to sleep in on both Saturday and Sunday (with brief interruptions for breastfeeding).  Saturday I slept in until 9 and Sunday until almost 10 (which technically is 9am with the spring forward dealy…)

On Friday, Henry made his first trip to Costco and slept through the entire trip. Guess he’ll have to see the wonders of Costco another time. I went there with Gillian who helped me figure out who to put a car seat in a shopping cart, which turns out is something I was really stressed out about to do on my own. In hindsight, it’s crazy to deprive yourself of an outing because you’re uncertain how you’ll place your kid in a cart but it was a real stressor for me up until Friday.  I went a little crazy buying things that I couldn’t eat while pregnant so lots of soft cheeses and cold cuts and coke zero!

Gillian spent most of the morning with us and held Henry pretty much the entire time which was also nice. I love holding my little guy but I hadn’t realized how tiring it can be holding a baby all day until I didn’t have to. We were then alone for about an hour when Pat showed up to look after Henry and gave me a chance to nap. So all in all, Friday was a great day.

Saturday was party day for my sisters Steph and Nina and we went to my mom’s place for dinner. Henry was a little darling the entire time. I’m so glad he can pretty much sleep and be held by anyone without freaking out. Although it’s tough to sit back when he does start freaking out and not snatching him up right away but Chris and I don’t want to reinforce that kind of behaviour so we sit and wait to see if he can be settled by the person holding him.

I’ve also made a big decision on Friday which is that I don’t care anymore about hiding myself while breastfeeding. I’ll use my nursing cover if I’m around someone who’s uncomfortable but if not, I’m wiping that boob out since it’s so much easier for feeding. When I told Gillian this on Friday she told me “I wondered how long it would take for you to not care anymore”. I guess quite a few moms go through that initial shyness and then decide to hell with it… 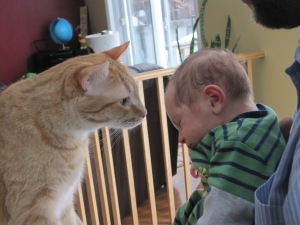 3 Responses to “To Sleep, Perchance to Dream”