Filed under: Uncategorized — frombeantosprout @ 11:04 am

Yesterday started off with a BANG! Unfortunately for Chris, he became collateral damage to that BANG. I was in our bedroom and Chris was changing Henry when I heard him yell “Oh Shit!” and then a panicked “Can you come here now!” so I went into the bedroom to find poor Chris covered in poo. He was changing the diaper and Henry just let everything go. That stuff gets a lot of distance. It was all over the change pad, Chris’ forearm, his bathrobe. So I took over while Chris cleaned himself up. I’ve been lucky enough so far to not get pooed on. Can’t say the same for peeing though. We were giving him a sponge bath the other day and I flipped him over and all of a sudden my chest got really warm and I looked down and it was soaking wet and Henry had this far off relieved look on his face.

After the whole exploding diaper issue, we went for lunch at Chris’ aunt Dawn and Alice. Henry rudely slept through the entire meal… sheesh, you try and teach your kids manners 🙂 We had hamburgers and french fries and it felt good to eat meat. We haven’t been eating much meat aside from the frozen meals my mom made for us (THANKS MOM!!!!) since it’s kind of hard to plan to defrost meat then cook it when you don’t know if 8 hours from now you’ll be dealing with a sleeping angel or a screaming devil (I kid, Henry’s cries are actually pretty cute).

We rushed home afterwards since we had an appointment with a public health nurse for a home visit but she called to reschedule since her own daughter was sick at school. She told me on the phone “yeah, it’s something you’re going to have to get used to”.

With our afternoon suddenly wide open, and it being such a beautiful day, we decided to take Henry for a walk in his pimped out stroller. If you’re looking for a stroller/car seat combo, I strongly suggest the Baby Trendz Expedition one. We were on a dirt/mud road yesterday and we were able to push it so easily. It was so easy to maneuver and Henry seems to like it. 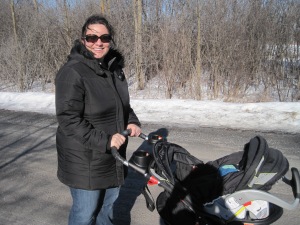 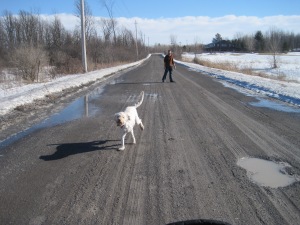 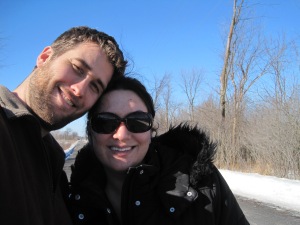 Chris and I always take this type of picture. I just love em. 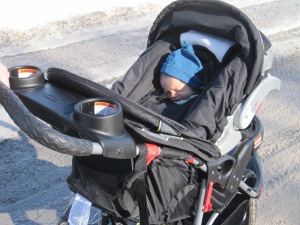 Our little Henry all bundled up

After our walk, on our way home, Chris and I saw this dog just wandering around our street with no owner. We have a fairly busy street which is on a OC transpo route so we brought Henry and Ginger home and Chris went out to check on the dog. He ended up bringing the dog home since none of our neighbors knew who he belonged to. We called the Humane Society who told us to bring the dog to a local vet to see if he was microchipped. So Chris brought him to the vet then came back about 30 minutes later to say he did have a microchip and was registered to the Humane Society. So back to square one. We called them again and told them the chip number and then they asked for all of our info since they can’t tell us the name of the owners. At around 5pm they called and said that they had left a message with the owners but hadn’t heard back and that we should bring the dog to them. So around 6pm Chris drove all the way to the Humane Society to drop off a dog who may very well live 2 houses down but due to privacy laws, we had no idea. For all we know, the entire family was out scrounging the neighborhood looking for him. Turns out his name is Caleb and I’m hoping the owners turned up to pick him up. He was such a sweetheart. He seemed well trained and loved playing with Ginger. 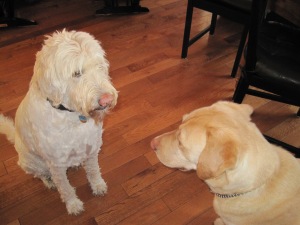 And then last night, we had a bit of a regression to feedings every hour from 9 until 2am. At least there was no crying though. Just a “give me food” rooting going on. I think we’re gearing up for Henry’s 2 week growth spurt. Oh and to other breastfeeding mom’s out there. Did it ever happen to you that while feeding, you’re reading a fairly interesting magazine article and then the feeding is over but not the article and you have this debate like “do I finish reading this or do I go to sleep?” I chose sleep each time but I still had the internal debate.