Filed under: Uncategorized — frombeantosprout @ 11:36 am

I must have lost 5-10 pounds last night from shivering alone. They don’t really tell you that after having a baby, your body goes through a bunch of different changes, it’s like a little secret they try and hide from you. I mentioned it to my doctor and he told me “well yeah, your body had 9 months to slowly adjust to the changes then it has to re-adjust within a few weeks, it’s going to wreak havoc on you”. He was right. I felt like a junkie last night in withdrawal. I couldn’t stop shaking. Poor Chris was holding Henry, getting him ready for bed and trying to comfort me at the same time. Between teeth chattering though I told him to take care of Henry first. Chris piled on a bunch of blankets on me and put a heading pad near my legs and it took a good hour for me to stop shivering. It’s quite the workout! I kept all the blankets piled on top of me for most of the night much to Chris’ chagrin. Apparently I was overheating him. He told me I was cooking his internal organs with the heat coming off my body so he lay half under the blankets for most of the night.

Henry had another good night and seems to be learning the difference between night and day. He woke up at 8am and didn’t go to sleep until around 11. I can’t believe how much his little face is changing already. A lot of the expressions he makes remind me of my Papa K (my grandfather on my dad’s side).  Funny since we had considered calling Henry, Kinsey (the K in Papa K). There’s just something about him that reminds me of him.

The lack of sleep hasn’t only been rough on us, it’s been rough on the animals as well. Atticus is used to sleeping a good 23 hours a day and now it’s down to about 20 hours. Poor little guy’s eyes are always bloodshot. Purrl naps when she can:

and of course, no post would be complete without a shot of our little guy: 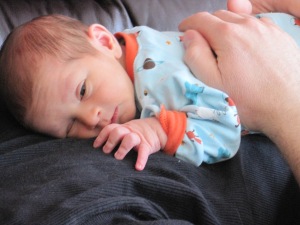