Last night was hell. Henry had lulled us into a false sense of security by being so great at night for the past week that we were not prepared for last night. He woke up to feed around 10pm and then all hell broke loose and he would not go back to sleep. He was just screaming his little head off and demanding to be fed every hour on the hour until around 3am. We tried everything to soothe him. Rocking, bouncing, swinging him, singing lullabies, changing… nothing worked. It’s like he couldn’t get enough to eat. The worst was that he’d psyche you out and look like he was about to fall asleep after nursing and we’d put him down in the bassinet, then like clockwork, in less than 5 minutes he was screaming bloody murder. I had these baby books opened up all night looking for solutions and Chris was on the internet trying to figure stuff out. We got him in the swing which seemed to work but since you can’t keep them in there all night, we took him out after about 20 minutes and the wailing started up again. Around 3 I fed him again and then Chris turned on the humidifier for the white noise which seemed to do the trick. Or maybe Henry was just exhausted by then himself and decided to sleep no matter what.

It sucks feeling like a hostage in your own bed at night. When we’d put him in his bassinet, we’d both be silently praying that he doesn’t wake up and I found myself holding my breath from time to time also. It’s a good thing he’s so freaking adorable, I couldn’t be mad at him. I know it was just as rough a night on the little guy as it was on us. I’m also really thankful for all the help Chris has been offering. He sacrificed more sleep than I did last night and would take Henry after a feeding and bring him downstairs and tell me to try and sleep a little bit.

Here’s hoping these nights are few and far between.

Here are a few more updated pics of our little man. I find his features are changing already. They grow up so fast! 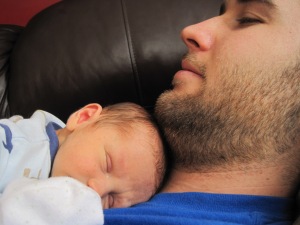