Good thing snowstorm day landed on a Wednesday. Wednesdays are Mr. Bean’s quiet days so I don’t expect him to make an appearance today. On days like this…

… I find my mind wandering to more tropical locations. Chris and I aren’t much “tropical island” type of people. We prefer planning our own trip and moving around rather than staying in an all inclusive resort but sometimes it would be nice to just lie on the beach and listen to the ocean and feel the hot wind. My last foray into tropical temperatures was last April when I spent a month working in Haiti. Yes, most people when they think of Haiti, they don’t think of “tropical paradise” but rather of images of abject poverty, rubble, devastation.  I was lucky enough to see a side of Haiti not many people get to experience.

When not working overtime or crashing at my hotel out of pure fatigue, we would sometimes do day trips outside of Port-au-Prince just to get some fresh air. On one Sunday we drove to the province of Jacmel to go swimming in the Basin Bleu which translates to “The Blue Lagoon”. It took us 5 hours to get there since most of the direct routes to the lagoon had been destroyed by the earthquake and once there, we hiked for about an hour into the woods, even scaling down a rock ledge with a rope to get to the fabled blue lagoon.  Once we got there though, it truly was a tropical paradise. The lagoon was actually blue and the water was so refreshingly cold, it really felt like it had healing properties to it. We swam for hour in this little lagoon and no one wanted to really leave at the end.

The entrance to the lagoon.

View from the rock in the middle of the lagoon

Haiti has tons of little spots like this, where people like myself wonder how it hasn’t developed a type of eco/sustainable tourism market.  After the lagoon, we went to Jacmel beach for dinner on the beach. We listened to a local Haitian band playing one continuous long song for over an hour and watched people swimming. A local orphanage had spent the day at the beach and they seemed to be having so much fun:

How adorable are these kids? 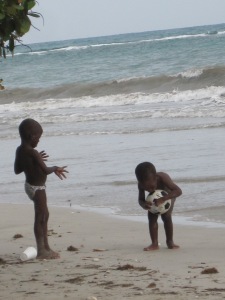 There were about 30 children all around this age (2-5) running around everywhere having a blast in the water. It was incredibly sweet to watch but also very sad knowing that with the earthquake, most of these kids wouldn’t have a chance to be adopted until the government had restored some kind of order (which it hasn’t really yet). At the embassy we had to tell prospective adopters that it could take up to 18 months for an adoption to be completed and that’s only after some form of infrastructure had been re-established.

After seeing what I saw in Haiti, I had decided to broach the subject of adopting a Haitian child with Chris when I got home. We discussed it a bit but then got a surprise of our own when we found out I was pregnant. I still think of these kids almost daily and hope that they find a permanent home soon. Who knows, maybe we’ll decide to adopt once we get our bearings with Mr. Bean.