Filed under: Uncategorized — frombeantosprout @ 9:33 am

As I mentioned last post, I’m kind of running out of projects to keep me occupied while waiting for Mr. Bean to come along. I took this picture of Ginger this morning and I think she’s starting to feel the same about having me here every day:

I’ve finally bought a new changing pad and the cover I made fits like a glove. the blue/yellow fabric was some fabric that my friend Amy sent me. I’ve been trying to figure out for a long time now what to make with it since I find it so pretty. I didn’t have quite enough to make the entire changing pad with it so I put some brown fabric to contrast it. Glad it turned out the way it did: 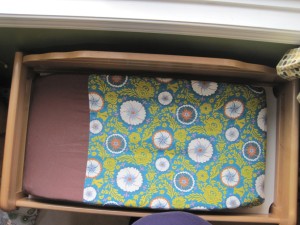 that purple thing peeking in at the bottom is Mr. Bean saying hey

I took some pics this morning of the curtains I made but the lighting is way off making them look super dark, so I’ll wait until later today hoping that they’ll show up better on camera.  I guess with crafting being pretty much done, I can move on to cooking meals and freezing them. A new neighbor of ours offered to cook us some meals which is really nice and I might take her up on it given that my frozen meals usually end up being pasta dishes and we’d probably get tired of those after a while.